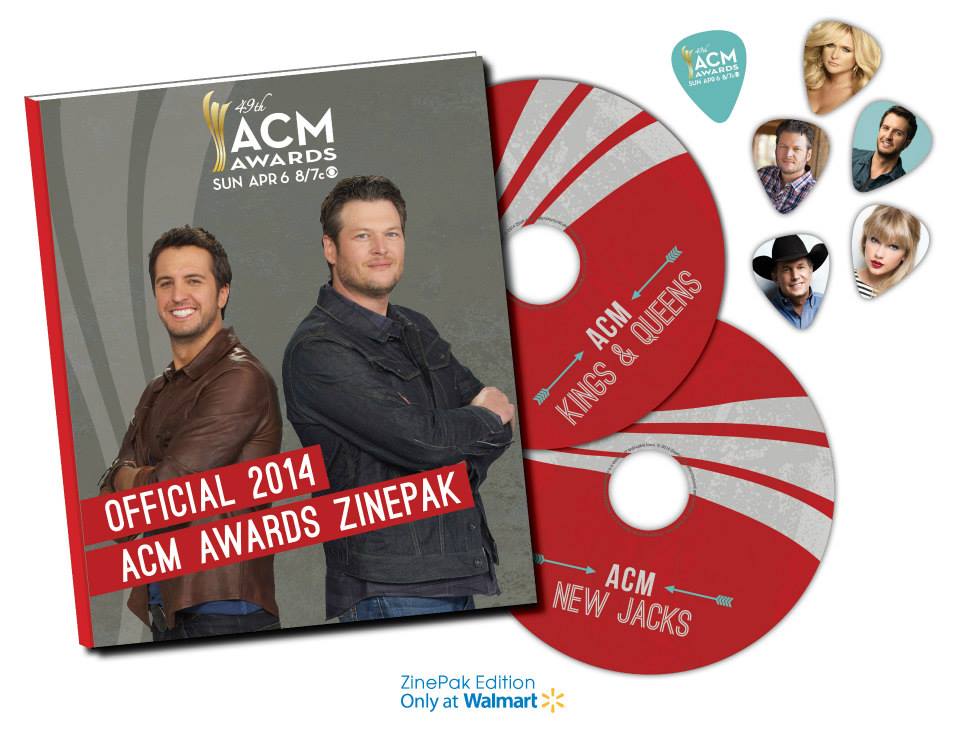 The Academy of Country Music and ZinePak are proud to announce the release of the Official 2014 ACM Awards ZinePak, a limited-edition package spotlighting countrys biggest names and brightest new stars. The collection pairs a 120-page magazine with 31 songs on two CDs.

It also includes a ballot with this years ACM Awards nominees and six collectible guitar picks. The ZinePak will be available at Walmart stores nationwide beginning on March 18, leading up to the LIVE broadcast of the 49th Annual Academy of Country Music Awards on Sunday April 6, 2014 at 8:00 PM live ET/delayed PT on the CBS Television Network. The package retails for $10.

“This years ACM Awards ZinePak is better than ever,” said Lisa Lee, the Academys senior vice president of Creative & Content Production. “Fans can find out everything they need to know about this years ACM Award nominees, immerse themselves in the best music of the year and even play along at home with their own ballot. Its a must-have for any country fan.”

This is the fourth partnership between the ACM and ZinePak. The previous three compilations (2011, 2012, and 2013) all debuted in the Top 20 on the Billboard Top Country Albums chart, despite being released in limited quantities and at only one retailer. Last years release debuted at #2 on the Compilation Albums Chart and broke the top 40 on Billboard 200.

In addition to exclusive interviews with more than 30 artists, the magazine gives fans an inside look at the Academy, including the history behind the organization and the Awards. Fans will also have access to 20 exclusive videos and photo galleries powered by the free ZinePak All Access app, available for download in the iTunes App Store and Google Play.

ZinePak co-founder Brittany Hodak said, ”We are so excited to give fans even more exclusive content in this years ACM Awards ZinePak through the ZinePak All Access app! By scanning specific pages, fans can watch interviews from stars like Luke Bryan, Jerrod Niemann, Eric Paslay and Blake Shelton.”

The package is currently available for pre-sale at Walmart.com, and will be available at Walmart stores nationwide beginning March 18. This fan collectable is only available while supplies last. Thanks to a generous sponsorship from Coors Light and Miller Lite, fans can buy the ZinePak for only $10.