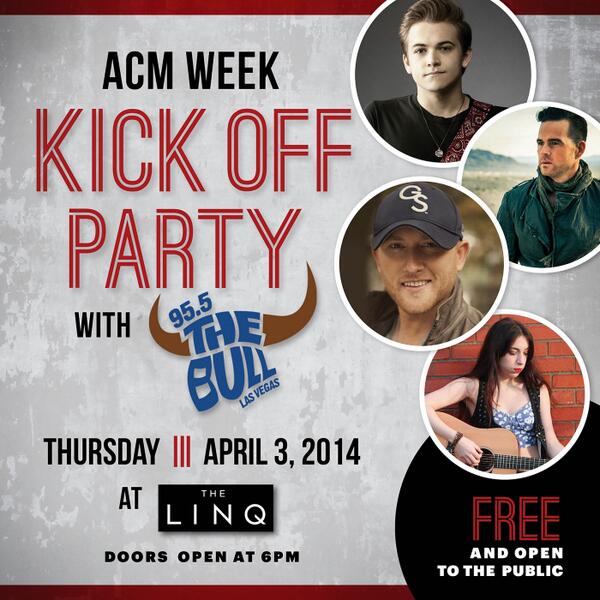 ACM Week Kick Off Party with 95.5 The Bull is a free open-to-the-public concert event headlined by Hunter Hayes on Thursday, April 3, 2014 at The LINQ. The event will officially kick off The Week Vegas Goes Country® and serve as a preview to the previously announced 2nd Annual ACM Party for a Cause® Festival, a two-day outdoor music festival headlined by Rascal Flatts and Keith Urban on Friday, April 4 and Saturday, April 5, respectively, also being held at The LINQ.

The events are all a part of The Week Vegas Goes Country® leading up to the 49th Academy of Country Music Awards on Sunday, April 6, 2014 at 8:00 PM live ET/delayed PT on the CBS Television Network.

During the ACM Week Kick Off Party with 95.5 The Bull Thursday event, fans can check out the interactive experiences at the Fun Zone, a family-friendly country marketplace with food trucks and vendors from around the country, bars, and much more starting at 6pm.

WHO: The evening will be headlined by Hunter Hayes and will include scheduled performances by David Nail, Cole Swindell and Sasha McVeigh.

TICKETS:  The ACM Week Kick Off Party with 95.5 The Bull is FREE and OPEN-TO-THE-PUBLIC with doors opening at 6:00pm.

One-day tickets for the ACM Party for a Cause® Festival are now available for $45 in addition to the available two-day ticket passes for $65 at www.ticketmaster.com.