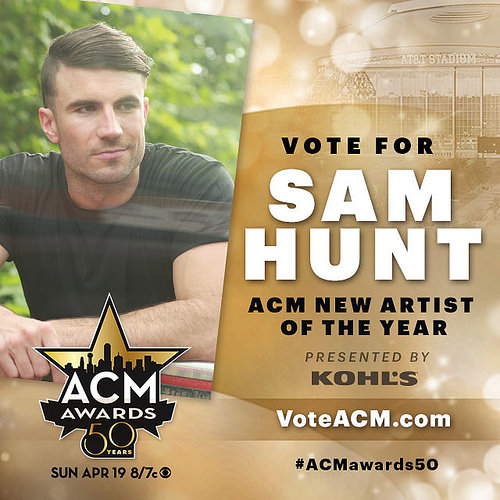 As an ACM New Artist of the Year nominee, Sam Hunt will perform during Sunday night’s (April 19th) show. He’s thrilled to be a part of the show, which he watched growing up.

“I’m looking forward to playing for such a big audience, not only there in the stadium, but the TV audience – the folks who are watching at home,” says Sam. “It’s such a huge awards show, and it’s a show I grew up watching and seen so many artists that I have grown up listening to perform on that show. So, to be a part of that group is going to be really special.”

The Georgia native has been so busy on the road that he hasn’t had a chance to catch up with any of his friends, but he hopes to remedy that when he’s in Dallas for the ACMs.

“We got my folks coming out with me to hang out, and I’m gonna see a lot of friends from Nashville that I really haven’t gotten to see a lot in a while, because we’ve been out on the road and been so busy for the past several months,” he adds. “So, there are several things that I’m looking to about the ACM Awards this year.”

You can vote for Sam, who is poised to take over the top spot on the country charts with his latest single “Take Your Time,” by going to VoteACM.com. The 50th Annual ACM Awards, hosted by Luke Bryan and Blake Shelton, will be broadcast live from AT&T Stadium in Arlington, Texas at 8pm ET on CBS.