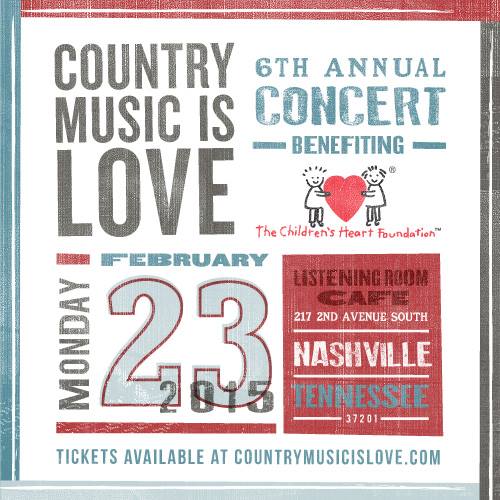 Hunt, who is nominated for the ACM New Artist of the Year award, exploded onto the country music scene with his No. 1 Platinum selling hit, ‘Leave the Night On,’ from his album Montevallo. The country heartthrob recently performed his latest hit, “Take Your Time,” on The Ellen DeGeneres Show (1/22). Other artists announced to perform include Jana Kramer, The Swon Brothers, Old Dominion, Austin Webb and more. The doors will open promptly at 6pm with Nashville’s Song Suffragettes to kick-start the star-studded evening of performances with an all-female songwriters round.

Creator of CountryMusicIsLove (CMIL), Lauren Black, chose a new charity to support this year, one in which she recently became aware of due to health issues within her own family. “In 2013, my nephew underwent open heart surgery to repair a congenital heart defect at just 13 months old,” explains Black. “That was a very frightening time in my family. Then, just a few months ago, doctors discovered a small hole in my 10-month-old son’s heart. To say this charity is close to my heart is an understatement. We hope we can be successful in raising much needed funds and awareness for CHF.”

All proceeds from the concert will be donated to The Children’s Heart Foundation, the country’s leading national organization solely committed to congenital heart research funding. The goal of the foundation is to bring health, hope and happiness to children and families impacted by congenital heart defects, the most common birth defect in the United States.

In previous years, the benefit has sold out, resulting in thousands of dollars in donations. Artists such as Kip Moore, Dustin Lynch, Brett Eldredge, Chase Rice, Thompson Square, Craig Campbell, have previously performed at the annual concert. Fans and supporters are urged to purchase tickets early.

DETAILS:
What: The 6th Annual CountryMusicIsLove Concert Benefiting The Children’s Heart Foundation
When: Monday, February 23, 2015
Where: The Listening Room Cafe | 217 2nd Avenue, Nashville, TN 37201
Time: Doors open at 6pm. Writers round starts at 6:15pm and the concert begins at 7pm.
Tickets are available for $20 at http://bit.ly/1Bbttqh