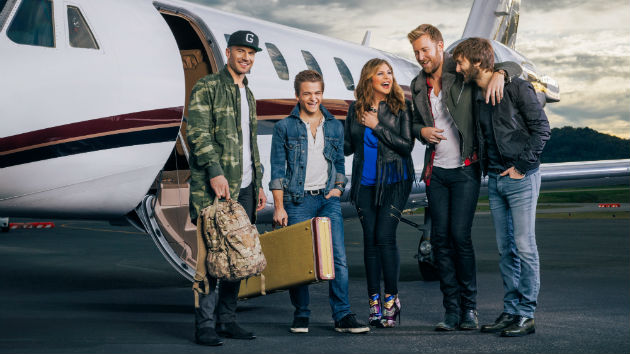 In advance of their performance on tomorrow’s People’s Choice Awards in Los Angeles, Lady Antebellum dropped by CBS’ The Talk today to announce their headlining WHEELS UP 2015 TOUR presented by Quicken Loans.

The band will kick things off on Feb. 28 with a European trek through Norway, Sweden, Ireland, Scotland, the UK and Australia and begin the North American leg on May 1 in Lubbock, TX. The tour will continue through the fall with triple-threat entertainer Hunter Hayes and red-hot newcomer Sam Hunt rounding out the electric lineup.

Citi is the official credit card of the WHEELS UP 2015 TOUR with Citi cardmembers having access to pre-sale tickets through Citi’s Private Pass Program at www.citiprivatepass.com, or visit www.LadyAntebellum.com to join the mailing list and be the first to know about VIP ticket information as more dates are announced. Fans can also purchase tickets in select markets as part of tour promoter Live Nation’s Country Megaticket beginning the week of Jan. 26 at www.Megaticket.com.

“The magic of being with fans from all over the country is really why we’re ultimately all here,” said Lady A’s Charles Kelley. “Being able to play off each other on that stage is honestly where we have the most fun, and I have a feeling the crowd will already be on their feet when we get out there after starting the night with Hunter and Sam!”

Last year, Lady Antebellum launched their 7FOR7 initiative where they fulfilled seven wishes for seven fans in seven days. Continuing with their unique campaign, the band has partnered with Detroit-based Quicken Loans, the nation’s second largest mortgage lender, to pay the mortgages of seven families across the country for one year.

“Lady Antebellum has very devoted fans and we cannot wait to help several of them not only enjoy some great music through our sponsorship of this tour, but also enjoy a yearlong vacation from mortgage payments,” said Jay Farner, President and Chief Marketing Officer for Quicken Loans.

The trio’s “warranted leap to stardom” (Dallas Morning News) and undeniable chemistry has continuously commanded the attention of critics who continue to praise their “effortless harmonies and raw emotion” (The Washington Post) and “top-notch, high energy” performances (The Boston Herald).

Later this week, Lady Antebellum will perform at the CMT Ultimate Kickoff Party live from Dallas, TX on Jan. 9 before they sing the National Anthem at the College Football Playoff National Championship on Jan. 12. For more information on the tour and a full list of appearances visit www.ladyantebellum.com.