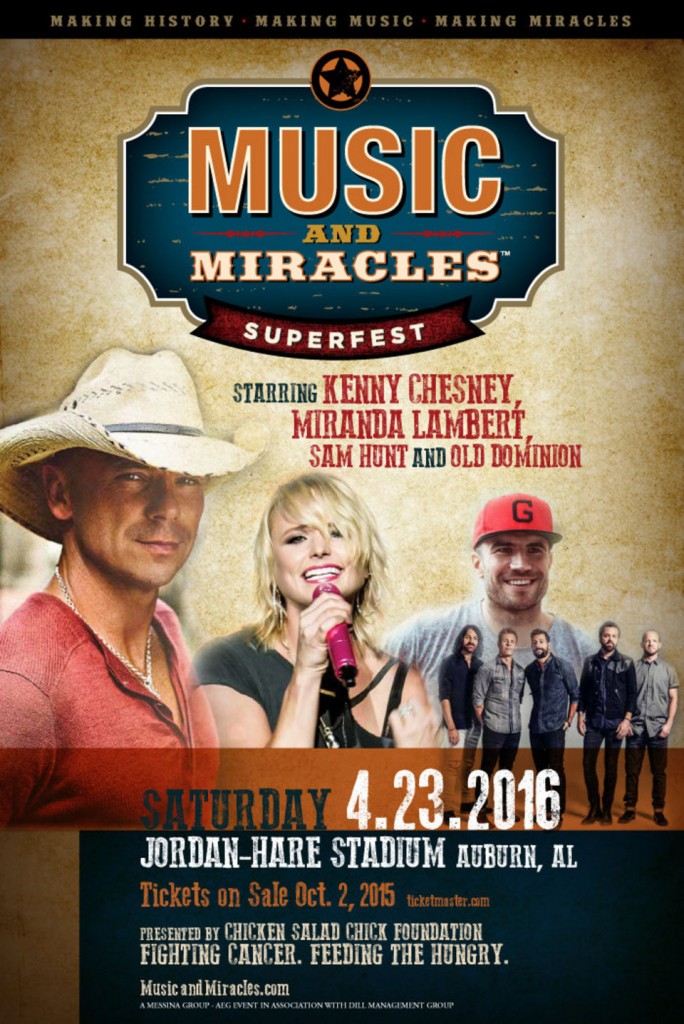 Anyone who knows anything about Kenny Chesney knows how deeply his passion for college football runs. So, it is with great pride that the only country act to grace Billboard’s Top 10 Touring Acts of the Past 25 Years becomes the first-ever concert at Jordan-Hare Stadium, home of the Auburn Tigers since 1939, when he plays the storied venue on Saturday, April 23, 2016. The show will be in conjunction with the inaugural Music & Miracles Superfest, created and presented by the founders of the Chicken Salad Chick Foundation.

“There is something about college football that inspires me,” Chesney says. “There is so much heart, so much dignity to playing for the honor of your school. There are, obviously, a lot of good times and great memories made at the games, and those guys on the teams play all out in ways most people don’t realize. Every time I get to play somewhere with the kind of history Auburn has, it pushes me a little harder to really raise the bar. And the mission and heart behind Music & Miracles raises that bar higher still.”

The mission of the Music & Miracles Superfest is to bring the biggest entertainers in America to one of the most notable venues in the southeast and raise funds for two of the greatest needs of the Auburn community. Proceeds from the concert will be targeted to fighting cancer and feeding the hungry.

Kevin and Stacy Brown, founders of the Chicken Salad Chick Foundation, note: “Our vision for the Music & Miracles Superfest is to make history, to make music, and to make miracles. And from the initial concept, we hoped that Kenny would accept our invitation and share our passion. The fact that he committed immediately after hearing about our big dreams showed us that not only is Kenny one of the most successful entertainers of our time, but his heart is as big as his star power.”

“We are excited that the Music & Miracles Superfest, organized and presented by the Chicken Salad Chick Foundation, will be the first concert ever in Jordan-Hare Stadium,” adds Jay Jacobs, athletic director for Auburn University. “Kenny Chesney and a stellar lineup of other top artists will put on a great show for an even greater cause. We appreciate the foundation’s efforts to fight cancer and feed the hungry, two initiatives that align with our own community service efforts.”

With the Music & Miracles Superfest serving as the first official date of Chesney’s 2016 stadium tour, the star-studded lineup will also include six-time Female Vocalist and four-time Album of the Year winner Miranda Lambert, multi-Platinum, chart-topping artist Sam Hunt and breakout country band Old Dominion. Lambert and Hunt are both nominated for CMA awards this year, with Lambert earning four nods (including one for Entertainer of the Year, along with Chesney) and Hunt earning three.

“We are gearing up for a very big year next year,” Chesney says. “I can’t wait to have Miranda and Sam out with us … and there are more surprises for sure. Things people have been asking us for a long time; places we’ve not been – or places we just really love playing. But to be able to start talking about 2016 with something like the Jordan-Hare Stadium? I can’t think of a better way to kick-off what’s going to be an incredible year.”