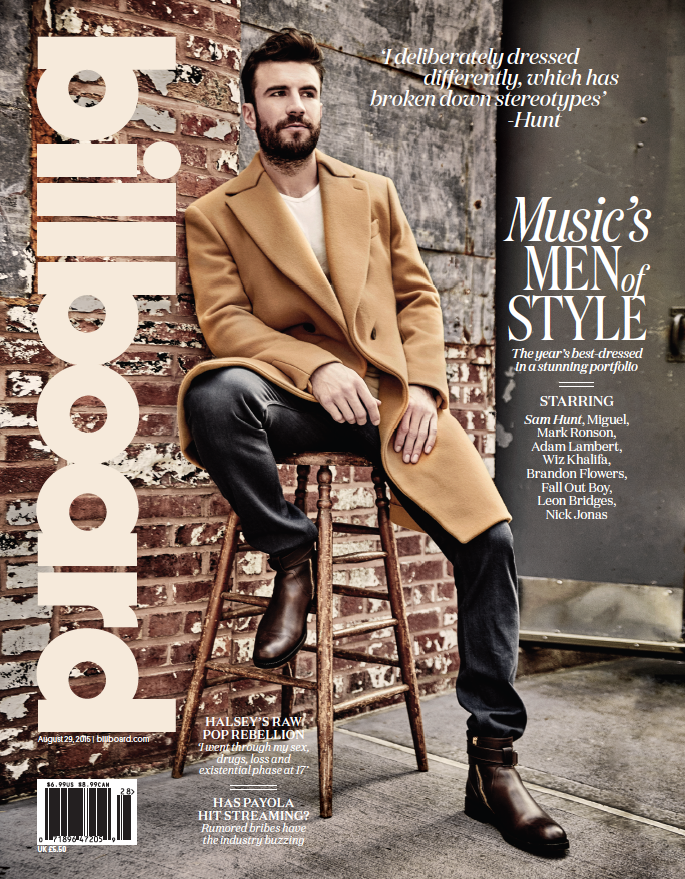 Breakout country star Sam Hunt is this week’s Billboard cover artist for Music’s Men of Style issue out today. This week also found Hunt performing his latest hit, “House Party,” on NBC’s “The Tonight Show Starring Jimmy Fallon” with an exclusive online performance of “Break Up In A Small Town.”

One year and one week ago, this up-and-coming Georgia-native released a four-song album preview while his debut single, “Leave the Night On,” was just making its way up the country charts. Since then, Hunt has had a near meteoric rise to the country music forefront. The Platinum-selling “Leave the Night On” quickly topped sales and airplay charts, and Hunt delivered country music’s best-selling debut album since 2011 with MONTEVALLO (MCA Nashville). He became the fastest debut country artist to earn a Gold album since 2012 when MONTEVALLO reached the 500,000 unit sales benchmark in April. MONTEVALLO remains one of the top-selling albums and is currently the all-genre No. 10 Best-Selling Digital Album year-to-date. Per Billboard, “Hunt, Ed Sheeran, Sam Smith and Taylor Swift are the only artists who have remained in the top 30 of the Billboard 200 since the start of 2015.”

Early on, Hunt proved his universal appeal when named the Cycle 5 winner of Spotify’s Emerge program – a first for a country artist in the all-genre competition. Hunt joins Macklemore & Ryan Lewis, Atlas Genius and Bastille in the ranks of former winners. Hunt is consistently one of Spotify’s top-played artists in the U.S. across all genres. Following that lead, the newly-dubbed Double Platinum-selling “Take Your Time” is currently making waves at Top 40 radio standing in the Top 15 of both the AC and Hot AC charts.

Another impressive feat for a newcomer, Hunt’s first-ever headlining tour sold out within minutes of going on sale. Also taking notice of Hunt, Taylor Swift recently surprised her Soldier Field fans with a guest appearance by the Billboard cover artist, calling him “the coolest thing country music has going on.”

Hunt is currently out on tour with Lady Antebellum on the Wheels Up 2015 Tour with upcoming stops in Omaha, Neb., Bonner Springs, Kan. and Chicago, Ill.