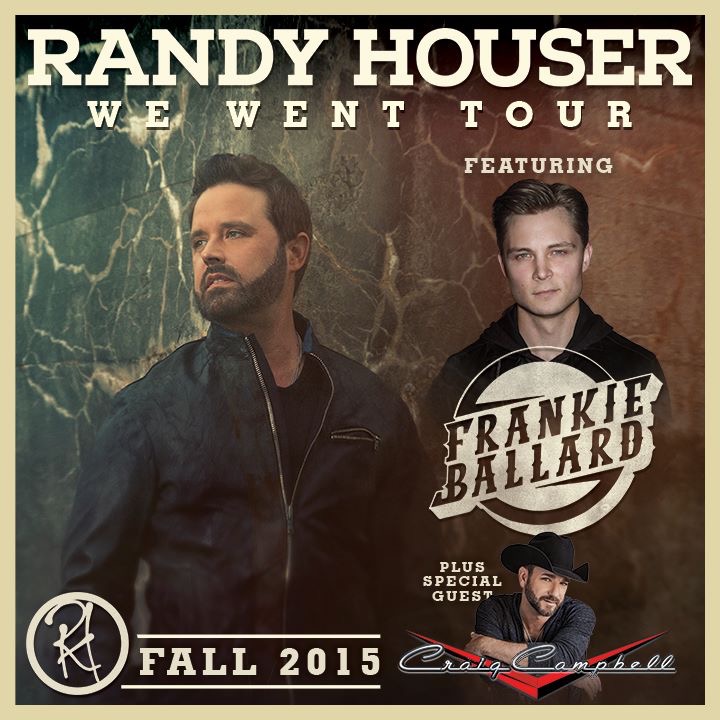 With his inimitably “rich, purling baritone” (The Washington Post) Randy Houser has earned a reputation as “one of Nashville’s best voices around” (American Songwriter), but those who have experienced his show for themselves know just how powerful Houser’s voice is live, in-person. The four-time Platinum selling, three-time chart-topping CMA/ACM award nominee and his band have logged thousands of miles on the road, and this fall they will set out for Houser’s We Went Tour, playing arenas across the country accompanied by Frankie Ballard and special guest Craig Campbell.

“We’ve had a blast touring with Luke [Bryan] this summer, and it’s been an incredible opportunity to play to some people we might not have played to before,” said Houser. “We’re really looking forward to building our show this fall, playing the arenas and getting to play some new music. Frankie and Craig are both great performers, and we’re ready to get out there and show people what we’re all about!”

Houser has received rave reviews while on the Kick The Dust Up Tour with Bryan, playing to arenas and stadiums across the country. During his performance at Nashville’s Nissan Stadium, the Boston Globe touted that “the big-voiced and big-hearted Houser is always a treat, but he pulled off one of the most intimate moments seen at the stadium level” and praised him for “reminding everyone in attendance that all you need is a good song and a heartfelt performance to create a powerful and enduring musical moment.”

Fans can expect a little bit of everything on the We Went Tour, as Houser draws from a deep catalogue of songs, from fan favorites like “Boots On” and “Whistlin’ Dixie” to smash hits such as “How Country Feels,” “Runnin’ Outta Moonlight” and “Like A Cowboy.” He will also perform new music from his forthcoming Stoney Creek Records album, including his current single, “We Went.” With skilled guitar-slinger Frankie Ballard — who has two No. 1 hits of his own with “Helluva Life” and “Sunshine & Whiskey” and a Top 5-and-climbing single on the charts with “Young & Crazy” — and the energetic Craig Campbell (“Outta My Head,” “Keep Them Kisses Comin’”) rounding out the bill, the We Went Tour will launch in full force in mid-November.

The first dates to be announced for the We Went Tour are as follows, with more shows and ticketing information to be revealed in the coming weeks: