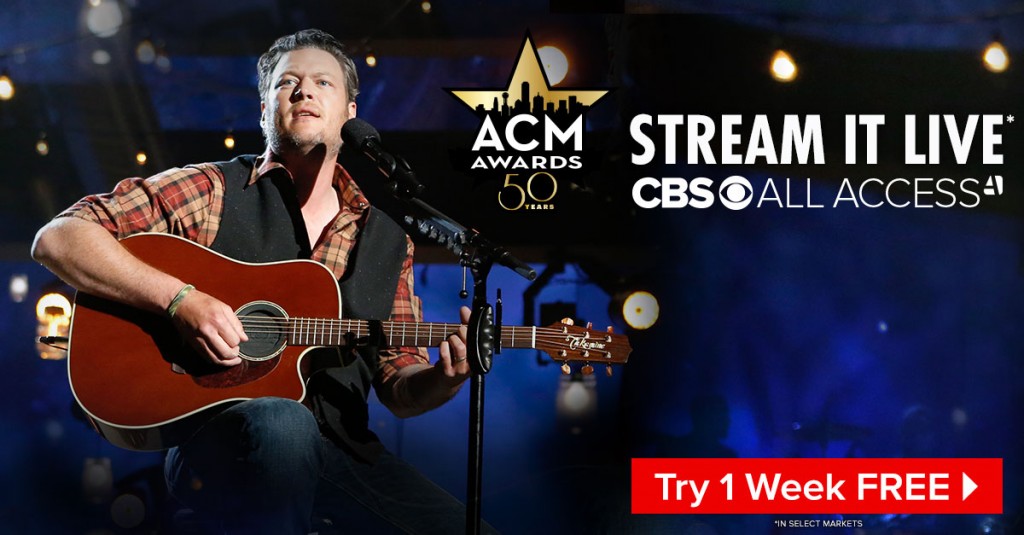 For the first time ever, country music fans will be able to watch the 50TH ACADEMY OF COUNTRY MUSIC AWARDS telecast live online, on their mobile devices, and on Roku players through the CBS Television Network’s subscription video on demand and live streaming service, CBS All Access.

In addition, fans still have the opportunity to help select the winner of the Academy’s most prestigious honor, Entertainer of the Year, for which Jason Aldean, Garth Brooks, Luke Bryan, Miranda Lambert and Florida Georgia Line are the nominees. Fan voting for Entertainer of the Year will close during the third hour of the live broadcast. Fans can also help choose the ACM New Artist of the Year Presented by Kohl’s, for which Sam Hunt, Thomas Rhett and Cole Swindell are the nominees. Fan voting for the New Artist of the Year category will close at 8:00 PM, ET/5:00 PM, PT on Sunday, April 19 (before the live telecast begins). To vote, visit VoteACM.com*.

Fans can also experience some of the action leading up to the telecast by following CBS.com’s ACM Award’s Social Media Reporter, 2 BROKE GIRLS star Beth Behrs, on CBS.com and Twitter (@BethBehrs) as she provides behind-the-scenes coverage of the ACM Awards. During the telecast, fans can also connect to ACM Backstage via CBS.com, a second-screen experience offering additional camera angles from around the AT&T Stadium, including the red carpet Glam Cam, presented by Mary Kay, a look inside the director’s truck, presented by RAM, and watch artists’ messages following performances, award wins and more.

In addition, CBS.com and the CBS App for iOS and Android also offer fans a new performance in the “ACM Sessions” series, the Academy of Country Music and CBS Interactive’s online concert series featuring some of country music’s biggest stars and rising talent performing their hits and participating in Q&A sessions. Presented by RAM, the new “ACM Sessions” performance features the ACM Award’s 2011 “Breakthrough Artist of the Year” Chris Young: http://www.cbs.com/shows/acm-sessions/chris-young/.

For more information on CBS All Access and to sign-up for a weeklong free trial visit HERE.