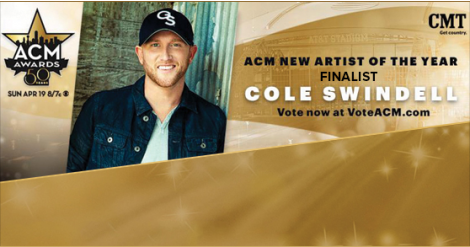 Warner Bros. Records recording artist Cole Swindell is gearing up for the 50th ACM Awards taking place this Sunday, April 19 at AT&T Stadium in Texas.  The country newcomer recently scored his third consecutive No.1 single with “Ain’t Worth The Whiskey,” and is a finalist for the ACM New Artist of the Year award.

CountryMusicRocks got the opportunity to catch up with Swindell regarding his nomination for the ACM Award. The award nomination resonates with the “Ain’t Worth The Whiskey” singer as he shares with us, “it means as much as anything that’s ever happen in my career. With this being in the fans’ hand and getting to the final 3, it’s a huge honor.”

The country music industry has clearly embraced Cole Swindell and what he brings to the country music genre, and so have country music fans. The ACM New Artist of Year Award Presented by Khols is a fan voted award, and knowing that fans have such a large part in this career milestone does not go unnoticed to the award nominee. “Without the fans, we wouldn’t be able to do this. They’re the ones who spend all their time & money, so I’m glad they let them play such a large role in picking the winner.”

Over the past couple of years, Swindell has established a great relationship with fans both on and off stage. When asked if his fans have an influence on his music for future projects/albums, he indicated “Always.” Swindell continues, “I want to write & record songs that help people — whether it’s to have a good time & unwind or something that helps them get through a hard time. That’s what country music is all about.”

Cole Swindell will be busy on the road throughout the spring and summer. He is currently on Jason Aldean’s “Burnin’ It Down Tour” which will fuse together with Kenny Chesney’s “The Big Revival Tour” for several tour dates. Being able to tour with seasoned artists in the industry, what does Cole want to soak up and take away from these experiences? “Everything about it. I want to learn from two of the best in the business & two of my favorites. I want to learn how to stay in this business that long and maybe be playing stadiums one day.”

While music is consistently evolving and growing, country music still stands out on it’s own. Swindell shares his thoughts on this and says, “Country music’s lyrics are so relatable to real life. The lyrics remain the true base of country music.”

There is still time to vote for Cole Swindell for ACM New Artist of the Year at to VoteACM.com. Spread the word and get your vote on!

The 50th Annual ACM Awards, hosted by Luke Bryan and Blake Shelton, will take place live from AT&T Stadium in Arlington, Texas and can be seen on CBS at 8pm ET.