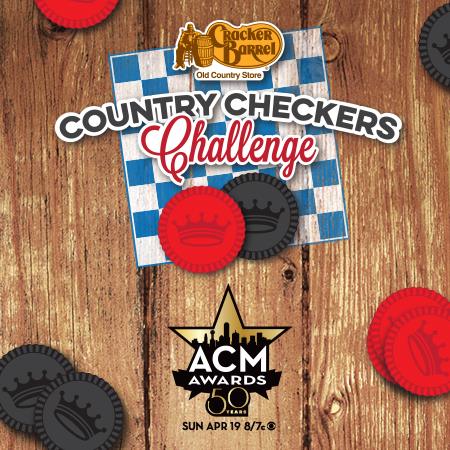 On Saturday, April 18, country music artists and team captains Kellie Pickler and Thomas Rhett will direct their opposing teams to battle it out on Cracker Barrel’s giant checkerboard. The fun takes place onsite at the 2015 ACM Party for a Cause Festival: 50 Years of Music & Memories at Globe Life Park in Arlington, Texas, leading up to the 50th ACM Awards.

Through a $35,000 donation from Cracker Barrel, ACM Lifting Lives® will donate $25,000 to the winning team’s charity and $10,000 to the losing team’s charity. Pickler, a USO tour vet, has selected the USO and Rhett has selected DAV as the benefiting charities. SiriusXM “The Highway” Satellite Radio personality Storme Warren will serve as host for the event.

“Music is as important to our country spirit as a home cooked meal,” said Chris Ciavarra, senior vice president of marketing for Cracker Barrel Old Country Store. “That’s why Cracker Barrel has partnered with the Academy of Country Music to celebrate their 50th Anniversary. We are excited about offering our fans everywhere an opportunity to connect with Cracker Barrel and the Academy by hosting both an online checkers tournament and an on-site celebrity game.”

Six Grand Prize Winners from the online Cracker Barrel Old Country Store Country Checkers Challenge (which begins today), two participants selected by Cracker Barrel at a later date, 12 country music artists to be revealed later, a representative from the USO, a representative from DAV, and the two spouses of the team captains will be divided equally to create the two opposing teams. Each team member will be a “human playing checkers piece” and will follow directions given by the team captains.

Additional details, including the names of the country music artists participating in the checkers game at ACM’s festival, will be revealed soon.

*NO PURCHASE NECESSARY. PURCHASE WILL NOT INCREASE ODDS OF WINNING. Open to legal residents of the Contiguous United States at or over the age of majority at time of entry. Starts 02/02/15 at 12:01 a.m. CT and ends 04/19/15 at 5:00 p.m. CT. Entry for the chance to win the grand prize ends 3/22/15 at 5:00 p.m. CT. Odds of winning will vary. Void where prohibited. Additional terms apply. For entry, prize, and other details, including the Official Rules, go to www.crackerbarrel.com. Sponsor: Cracker Barrel Old Country Store, Inc., Lebanon, TN.