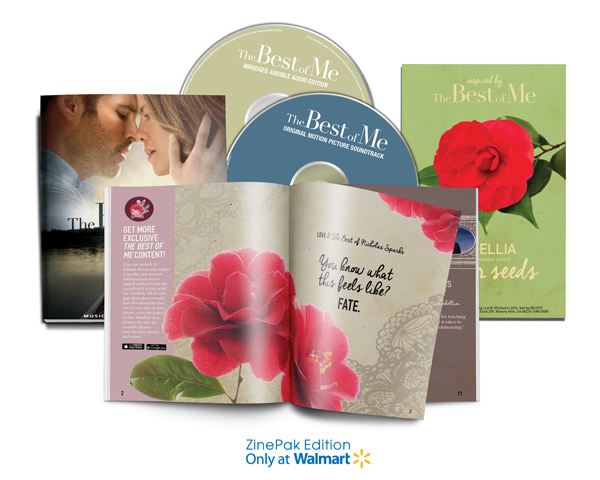 The Best Of Me ZinePak featuring music from the motion picture is a must-have for all Nicholas Sparks fans and country music lovers. Relativity Music Group partnered with ZinePak, an entertainment company that specializes in creating collectible publications for superfans, to create a truly unique package that gives fans a closer look at Nicholas Sparks, the artists on the soundtrack, and the movie itself.

The Best Of Me Soundtrack ZinePak released via Relativity Music Group hits shelves on October 7 exclusively at Walmart and Walmart.com. The limited-edition double-disc package includes the soundtrack to the upcoming film, featuring Lady Antebellum’s new smash song “I Did With You,” an audiobook of the novel that inspired the film, a 48-page deluxe magazine with behind-the-scenes trivia and interviews with the cast, artists from the soundtrack, Nicholas Sparks, and director Michael Hoffman. Plus exclusive mobile videos from the cast, a packet of flower seeds, and $7.50 towards the purchase of one admission to see The Best Of Me at participating theaters. Available only at Walmart while supplies last.

The ZinePak is available for preorder now: http://bit.ly/BestofMeZinePak.

Relativity Studios will release the film, starring Michelle Monaghan and James Marsden, in theaters nationwide on October 17. For more information about the film, follow the movie on twitter @BestOfMeMovie or tumblr at TheBestOfMeMovie.tumblr.com.