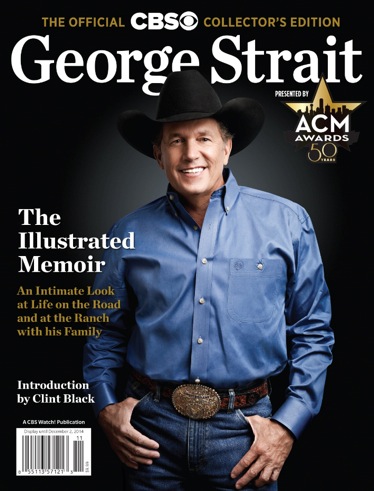 The Academy of Country Music and CBS Watch! magazine have partnered to present the first-ever ACM commemorative “bookazine,” GEORGE STRAIT, available TODAY to music fans everywhere at newsstands across the U.S. and Canada – including Wal-Mart, Kroger, Barnes & Noble, and more. Fans may also order at Amazon via http://amzn.to/1vOdYTy.

The only official collector’s edition, GEORGE STRAIT, celebrates country music’s finest talent and reigning ACM Entertainer of the Year with an intimate look at Strait’s life and includes a retrospective of 50 stellar years of the ACM Awards. This one-of-a-kind tribute to the King of Country features exclusive photos from Strait’s Texas ranch, behind the scenes moments, and introduction by ACM Award winner and country mega-star, Clint Black.

“This is an exclusive tribute to a country music legend,” said Jeremy Murphy, Watch! magazine Vice President. “We are very pleased to have partnered with the Academy of Country Music in celebrating George Strait’s life and career, and the impact he has had on an enduring medium. Our special edition features exclusive photos, anecdotes and memories readers cannot find anywhere else.”

In anticipation of the ACM Awards golden anniversary telecast next spring, this GEORGE STRAIT special publication includes some behind-the-scenes moments of past ACM Awards and a “sneak peek” at what music fans can expect of the 50th Annual Academy of Country Music Awards, hosted by Blake Shelton and Luke Bryan, which will be broadcast LIVE from the home of the Dallas Cowboys, AT&T Stadium in Arlington, TX on Sunday, April 19, 2015, at 8:00 P.M. live ET/delayed PT on the CBS Television Network.