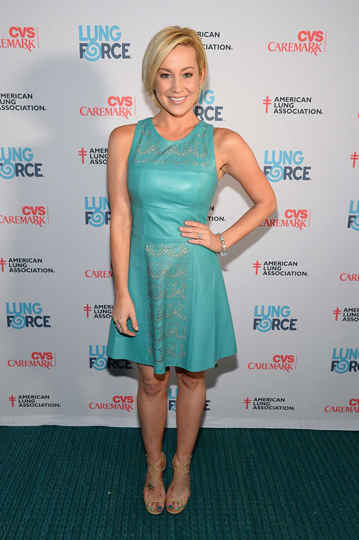 According to the Lung Association’s inaugural Women’s Lung Health Barometer, a survey of more than 1,000 American adult women that measures women’s knowledge and perceptions about lung cancer, women’s awareness of lung cancer’s impact is terribly low. Despite being the #1 cancer killer of women, the Barometer revealed that only 1 percent of women cited lung cancer as a cancer that is top–of–mind for them. The reality is that more than 108,000 women in the U.S. will be diagnosed with lung cancer this year and, on average, less than half will be alive next year.

Lung cancer is a disease that has personally affected actress and author, Valerie Harper and entertainer and country music star, Kellie Pickler. Their experiences motivated them to join LUNG FORCE.

“I feel fortunate that I have been able to defy the odds of this challenging disease given that my mother died of lung cancer although, like me, she never smoked,” said Harper. “And while I have my newfound strength and the opportunity, I want to make lung cancer a disease that people care about and act on. Whether that’s educating key decision makers or working for advances in early detection, I am committed to seeing LUNG FORCE succeed in extending and saving women’s lives.”

When she was 15, Pickler lost her grandmother to lung cancer just one day after she was diagnosed. Pickler’s grandmother played an important role in her life and continues to serve as an inspiration for her work. In her remembrance, Pickler included a song called “My Angel” on her debut album, Small Town Girl.

“One of the hardest things I’ve had to experience was losing my grandmother to lung cancer,” said Pickler. “Not only was she a loving, strong, and gracious person, she was also the woman that I called ’mom.’ I support LUNG FORCE in hopes that others won’t have to lose such amazing women in their lives.”

Pickler appears alongside Grammy–nominated singer–songwriter, Jewel, in the first LUNG FORCE public service announcement. The PSA calls on women to understand lung cancer’s impact, share what they know with others, and join the fight at LUNGFORCE.org. Click the video below to view.