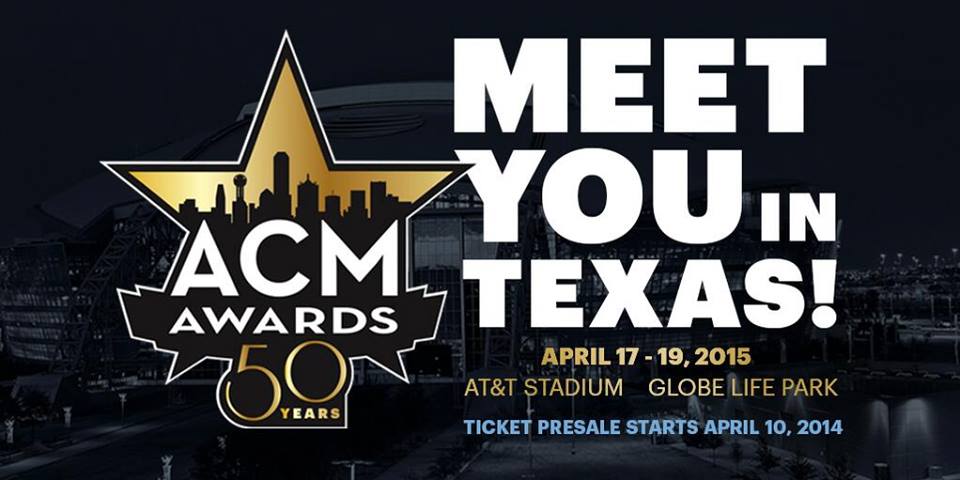 Owner, President and General Manager of the Dallas Cowboys, Jerry Jones and the king of country music, Texas-born, and reigning ACM Entertainer of the Year George Strait, shared exciting news at the 49th ACM Awards with an invitation fans to attend the largest celebration in country music history from the home of the Dallas Cowboys:  The 50th ANNIVERSARY OF THE ACADEMY OF COUNTRY MUSIC AWARDS, Country Music’s Party of the Year®, to be broadcast LIVE from AT&T Stadium in Arlington, TX on Sunday, April 19, 2015 at 8:00 PM live ET/delayed PT on the CBS Television Network.

“For our 50th Anniversary, we wanted to invite more fans than ever to our party,” said Bob Romeo, CEO of the Academy of Country Music. “Tickets to the ACM Awards sell out in minutes, country fans make their vacation plans around our events. In 2015, we’ll celebrate with the biggest group of mega artists at ACM Party for a Cause and allow more music fans to experience the Awards by hosting it in the premier stadium in the country.”

“We couldn’t be more thrilled about the ACM Awards coming to AT&T Stadium next year.  It will be the first event of its kind at the home of the Dallas Cowboys.  The stadium was built to host world class events such as this, and it doesn’t get any bigger than the ACMs.  The excitement from fans across the country, our great fans in Texas, and this venue will provide the biggest and best stage available to showcase country music and its stars to the world,” said Jones.

“I won my first ACM in 1984, and to see a landmark event like the ACM Awards move to one of the biggest venues in the country to create a historical country music experience of this magnitude, it is a testament to the fans,” said George Strait, “I am thrilled to have been a part of the announcement of this milestone event coming to my home state of Texas.”  Strait took home the coveted, fan-voted ACM Entertainer of the Year award – the second of his career – shortly after the announcement was made.

Four-time ACM Award winners Blake Shelton and Luke Bryan will return to co-host this super-sized night of incredible country music performances, which will cap off three days of events, including the 3rd annual ACM Party for a Cause®: 50 Years of Music & Memories on April 17-18, 2015 at Globe Life Park in Arlington, Texas. This two-day outdoor music event will include multiple stages for ongoing LIVE country music performances, interactive experiences, a family-friendly country marketplace with food trucks and vendors from around the country, and much more. You won’t want to miss this event that will include more than 30 different artists, proceeds benefitting yet to be announced charitable organizations. Participating artists will be announced at a later date.

Music fans ready to experience a Texas-sized, once-in-a-lifetime vacation—complete with a singular, exclusive ACM Awards golden anniversary experience – can purchase tickets beginning Tuesday, April 15, 2014, with many levels of ticket packages being offered.  For event updates, ticket on-sale links, hotel information and more, visit www.ACMcountry.com.  Country fans may sign up for the ACM A-List for FREE at www.ACMcountry.com to receive the ticket purchase pre-sale code and information.

ACM A-LIST MEMBER TICKET PRE-SALE:  ACM A-List Members can purchase tickets in a special pre-sale beginning at 10 AM (CT) Thursday, April 10, 2014 by visiting www.ticketmaster.com. The pre-sale code will be emailed to all A-List Members prior to the on-sale date.

GENERAL PUBLIC TICKET ON-SALE: Tickets will go on-sale to the general public at 10 AM (CT) Tuesday, April 15, 2014 at www.ACMawards.com.