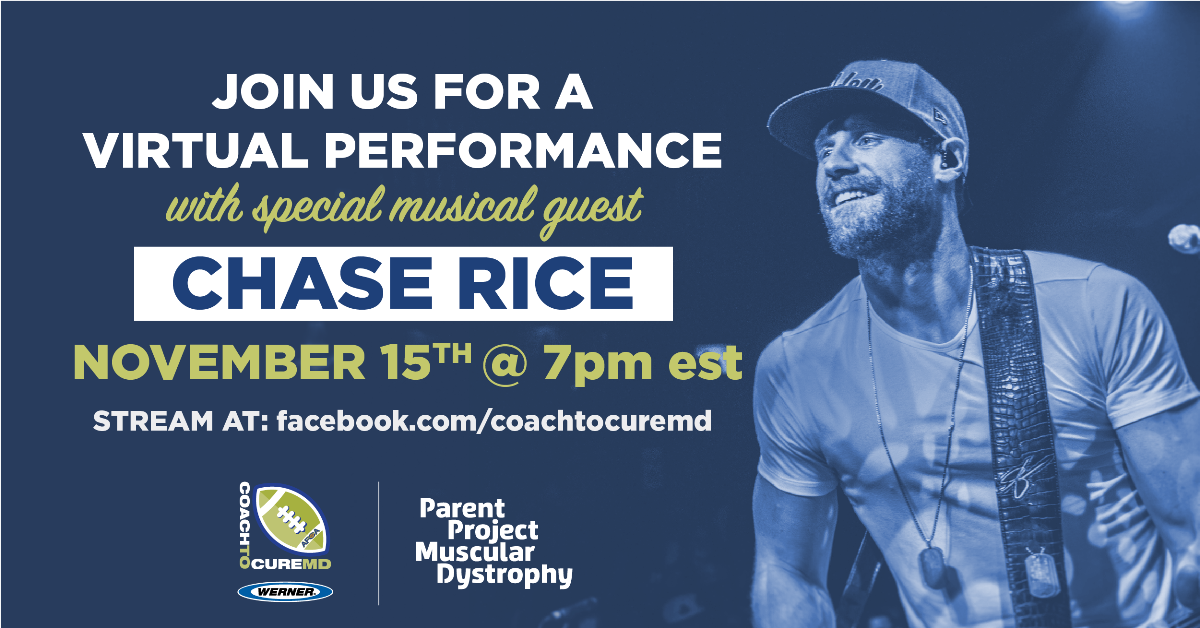 Multi-Platinum entertainer Chase Rice will host a special live stream concert to raise awareness for Coach To Cure MD in their fight to find a cure for Duchenne muscular dystrophy, supporting the cause via a month-long awareness campaign under his Head Down Eyes Up Foundation’s charitable efforts. Now in its 13th year, Coach To Cure MD is the official charitable partner of the American Football Coaches Association (AFCA) dedicated to supporting Parent Project Muscular Dystrophy (PPMD), the largest, most comprehensive organization in the U.S. focused entirely on Duchenne.

The live stream concert will be held on Sunday, November 15, at 7 p.m. ET via Facebook at Facebook.com/CoachToCureMD.

Rice, who first became connected with the cause through relationships formed during his own time as a college football player, will host the live stream concert to bring additional attention to the cause during a year when Duchenne families cannot take to the sidelines as they have since 2008. The virtual performance is a free event, with fans encouraged to support the fight to end Duchenne by going to CoachToCureMD.org to make a donation.

“I love college football and so many of the coaches I know have personal relationships with families from welcoming them to the sidelines over the years. Seeing the impact they have on these kids and the cause as a whole is why I wanted to get involved,” said Rice, who played linebacker for the University of North Carolina before finding success as an artist. “In a year where game days look a little different, I hope that we can still help raise awareness and funds for this important cause through the power of music.”

Duchenne is the most common fatal genetic disorder diagnosed during childhood, primarily affecting boys of all races and cultures. People with Duchenne develop progressive muscle weakness that eventually causes loss of mobility, wheelchair dependency and a decline in respiratory and cardiac function. Currently there is no cure for Duchenne, but thanks to Coach To Cure MD and the work of Parent Project Muscular Dystrophy, there is hope.