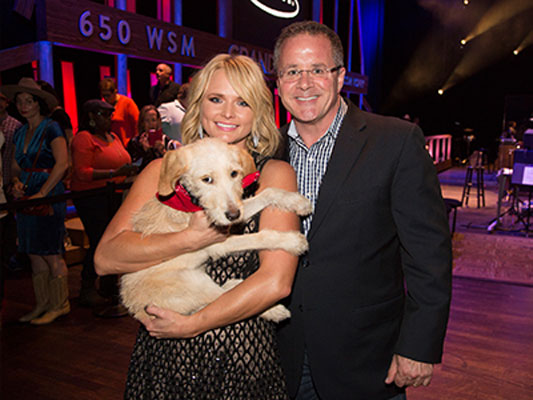 The Opry family fell particularly hard for a labrador/terrier mix named Charlie and decided to welcome him to the fold, with a number of Opry staffers sharing responsibility for his well-being. Before making his Opry stage debut in Lambert’s arms on Tuesday night, Charlie had been found along with his two littermates dropped on someone’s property in rural Okalahoma. A good samaritan drove them to Lambert’s Redemption Ranch in early July. The three puppies were among those that made the trek to Music City, and all three found Nashville homes.

Charlie is now enjoying some time learning the ropes of being a good Opry dog and is said to be selecting proper attire for a visit to the Opry for its annual “Opry Goes Pink” show on Tuesday, October 27.

Throughout October, Opry guests are invited to use the code “PAWS” when purchasing Opry tickets to designate a portion of those ticket proceeds benefit MuttNation. Sales of special items including dog collars and “Puppy Opry” prints available in the Opry’s Nashville retail stores and opry.com will also help benefit the Foundation. Fans can also bid on autographed merchandise and experiences at opry.com throughout October with all proceeds benefitting MuttNation.