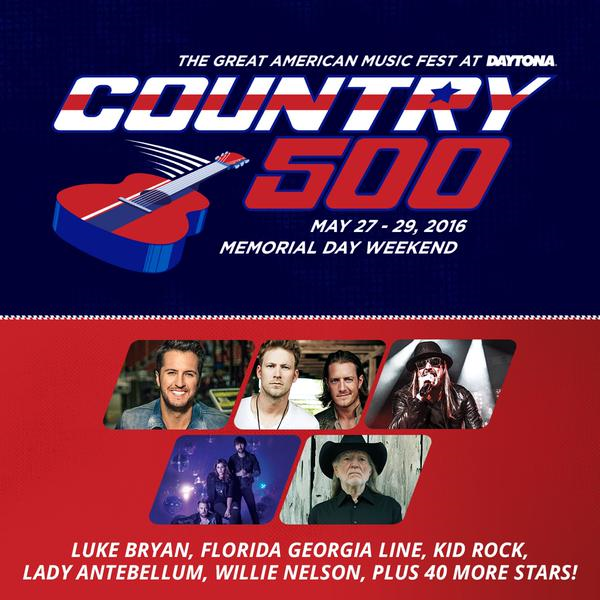 The complete Country 500 lineup, including the Friday night headliner, will be released on November 3 and tickets, camping and VIP packages will go on sale to the public the same day.

Fans should plan to take advantage of the special early bird pricing ($199) for weekend general admission passes beginning on November 3.

Also called “The Great American Music Fest at Daytona,” the Country 500 festival will feature the biggest stars in country music spread over three days and nights, programmed on three huge performance stages—all specially designed and built for the festival. Country 500 will take place on the infield of the world-famous Daytona International Speedway, a historic first mega-music festival inside the hallowed grounds of one of the most iconic motorsports venues in America.

Just as it is for the great races at the Speedway, Country 500 will allow fans to actually camp out in the infield, literally inside the festival. A full-range of camping opportunities is available for virtually any budget, from pitching a tent to deluxe RV locations.

Special VIP packages called “Crew Chief VIP Experience” and “VIP Pit Pass” (see below) allow for an exclusive upfront, golden-circle viewing area at the main stage with side stage access at the other performances areas plus access to comfortable hospitality areas, private cash bars and many other comforts and amenities. Visit Country500.com or call 1-844-500-FEST for VIP benefits, camping information and all the Country 500 details.

Fans at the festival will also have the opportunity to get up close and personal with some of their favorite country stars at artist meet-and-greets located throughout pit road and the garages. Numerous other features—a select festival menu sold from food booths and food trucks; carnival rides; arcade games; cooling water elements; country-and-western merchandise; fireworks; and more—will all be a part of the festival, as Country 500 transforms racing’s greatest venue into a festival-goer’s dream.

Visit Country500.com or call 1-844-500-FEST for tickets, camping, parking, and other festival information. Make sure to sign up on the Country 500 mailing list and get all the festival info including travel packages and hotel accommodations as soon as it becomes available.

“Luke Bryan closing out the Festival Sunday night; Kid Rock, Willie Nelson, and a homecoming celebration with Florida Georgia Line all on Saturday night; another superstar still to be announced to close Friday night; plus 40 more stars will be featured on the three stages over three days,” said Festival Producer Quint Davis. “The Country 500, like its older brother on the race track, will positively rock the one and only Daytona International Speedway. Be the first to get your favorite camping spot on the infield inside the Festival. Look for the full lineup and tickets on sale November 3.”

“We’re proud to develop this new partnership with AEG Live and Festival Productions, Inc. – New Orleans and bring the Country 500 music festival to Daytona International Speedway,” Track President Joie Chitwood III said. “Signature events such as the DAYTONA 500 and the Rolex 24 At Daytona have made DIS the ‘World Center of Racing’ but by securing this marquee music festival with an amazing lineup of artists, we will also be known as the ‘World Center of Entertainment.”