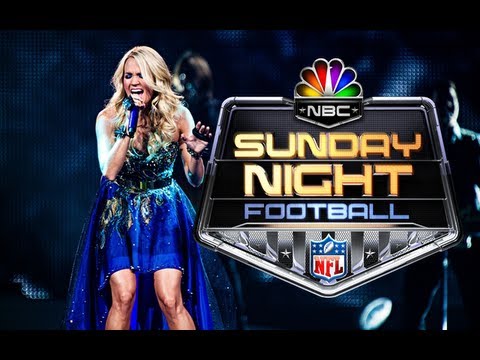 Carrie will visit with The Tonight Show Starring Jimmy Fallon on Thursday, September 10 to show a sneak peek of the opening theme and will also perform her new single “Smoke Break.”

After performing the opening theme for the past two seasons, Underwood returns in 2015 beginning with NBC’s first SNF broadcast of the 2015 NFL season as the defending NFC East champion Dallas Cowboys host the New York Giants. Coverage begins with Football Night in America at 7 p.m. ET, and the opening theme continues each week of the season to kick off Sunday Night Football.

11 NFL players, who have accounted for 33 Pro Bowl selections, three Super Bowl rings, and seven first-round draft picks, will participate in the open (eight, denoted with an asterisk*, took part in a shoot this past June).  Following is the complete list:

Players who participated in this year’s SNF shoot provided some commentary on the set:

Clay Matthews: “The fact that I’ve been invited four times to come back is truly an honor. I must be great on camera, or I live close by.”

Dez Bryant on his first SNF open shoot: “This has always been a dream.”

Antonio Brown: “You gotta love it – Sunday Night Football, Carrie Underwood, it doesn’t get any better.”

Patrick Peterson on his first SNF open shoot: “I’ve never been here before! So, I didn’t know what to expect.”

Odell Beckham, Jr.: “I’m definitely blessed to be a part of this.”

Antonio Brown as a stylist ties his shoes: “I’ve never had anyone tie my shoes!”

Kam Chancellor: “Modeling wasn’t in my career (before), but, you know, I’m trying my best.”

Andrew Luck: “I did not know I would be doing this shoot with Carrie, so, it was a bit of a surprise. I guess the cameras are rolling!”

Patrick Peterson: “It’s definitely fun being with other players and seeing how they interact with the camera.”

“Waiting All Day for Sunday Night” is set to the original Joan Jett song, “I Hate Myself for Loving You.”

In addition, with Sunday Night Football kicking off its 10th season in September, NBC Sports enlisted a 10-year-old reporter to interview NFL stars at this year’s opening theme shoot. Click here for a link to the full piece.