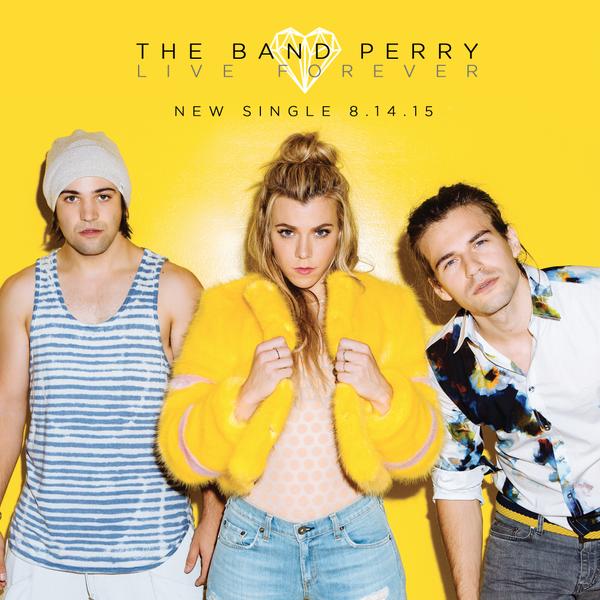 GRAMMY® Award-winning superstar sibling trio – THE BAND PERRY – will release their roaring new anthem “Live Forever” on Friday, August 14. The track, produced by RedOne and Dann Huff, is the first taste of new music from The Band Perry’s forthcoming album due for release later this fall by Big Machine Label Group.

“Live Forever” will debut on Country radio nationwide on August 14 and will be available for purchase the same day at all digital retailers.

“‘Live Forever’ is the best first look into our new album,” said Kimberly Perry. “It emotionally sums up everything we’ve been feeling creating this new collection of songs – empowered and electrified.”

“Every time I hear the chorus of ‘Live Forever,’ I can’t help but put my hands up in the air,” said Reid Perry. “It’s one of those songs that, after listening to it, makes you feel like you can conquer the world.”

“I can’t wait for people to hear and learn the words to ‘Live Forever,’” said Neil Perry. “It’s such an anthemic song, and I know it’s going to be a huge sing-a-long moment for us with the fans at our shows!”

The Band Perry will perform “Live Forever” for the first time on national television – as well as other fan favorites – on Friday, August 14 when they make their first-ever appearance at Central Park’s famed SummerStage in Rumsey Playfield as part of Good Morning America’s Summer Concert Series. Good Morning America is broadcast live on ABC from 7-9AM EST / PST. Check local listings. The concert is free and open to the public. Viewers interested in joining “GMA” in Central Park are encouraged to arrive at Rumsey Playfield via the 72nd street entrance on Fifth Avenue at 6AM EST when the park opens to the public.

“We can’t wait to wake up early with our fans and play our new single live on Good Morning America,” added The Band Perry. “We love to play live, and in true Band Perry fashion, plan to make this equally memorable for everyone in the park AND those watching at home.”

iHeartMedia will host a World Premiere event to introduce “Live Forever” to music fans across the US beginning August 14 on iHeartMedia Country radio stations and on iHeartRadio.com.

The music video for “Live Forever” will make its world broadcast premiere on CMT for 48-hours starting Saturday, August 15 on CMT’s Hot 20 Countdown, CMT Artists App and CMT.com. It will air every hour on the hour on the network and every other hour on CMT Pure Country. The video was directed by Collin Tilley and features both narrative and performance by the all-American band in a new and unique performance space called THE CUBE.

THE CUBE is an immersive, mobile musical performance space with walls made of huge rear-projection screens that bear kinetic visuals. Debuted at The Band Perry’s fan club party at this past June, fans enter into THE CUBE and are placed right inside the music’s energy while The Band Perry performs for them on a centralized stage, in face-to-face proximity with the crowd. Everyone inside THE CUBE is completely surrounded by filmed visuals, light, and music.