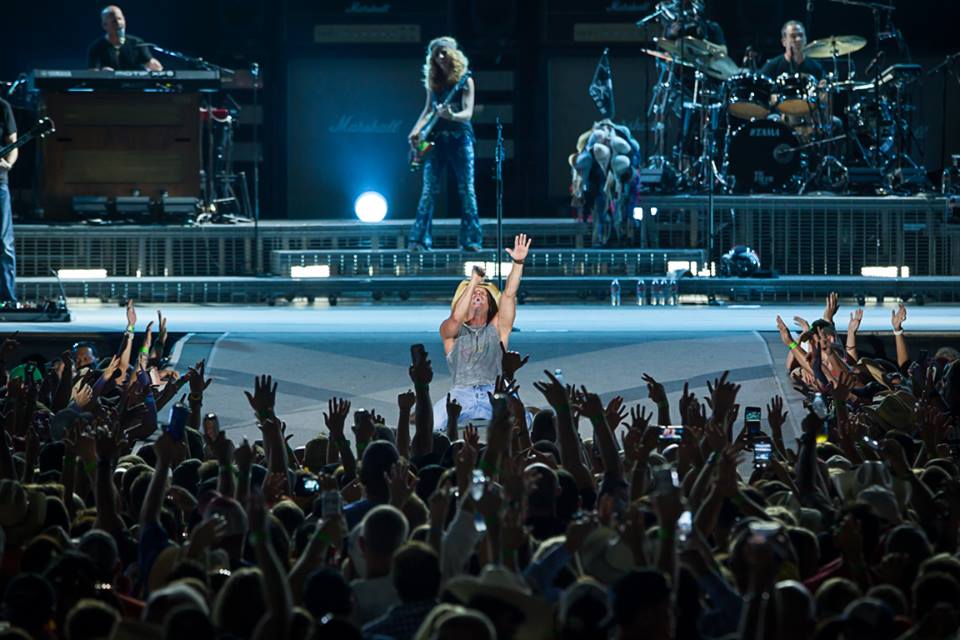 Midway through Kenny Chesney’s beyond belly-to-belly packed set, MetLife Stadium sent out a Tweet that said: “Congrats @kennychesney – Highest selling country artist OF ALL TIME in NJ! Thanks Kenny & the 58,642 fans here 2nite!” Marking his fourth appearance at the stadium where the Giants and Mets play, Chesney had topped his own number for the third time, besting a record set by Willie Nelson in the ‘70s.

“The thing about East Rutherford,” Chesney said, “they’re all heart – and they bring it. That passion, the way they really throw themselves at life, really dig in and live it full tilt… that’s how they love music, too. I’ve never walked out of MetLife not rocked to my core, and they just throw you against the wall with how they come to the shows. I could feel tonight was even more intense, but I had no idea they’d crushed the record again.”

This has been a summer of record-smashing. With 135 stadium shows played once the Big Revival 2015 is over, the man The Dallas Morning News wrote is “Two parts Mick Jagger, one part Bruce Springsteen and one part Billy Graham,” has broken his previously set records – some for the second and third time — at Pittsburgh’s Heinz Field, Green Bay’s Lambeau Field, Philadelphia’s Lincoln Financial Field and Minneapolis’ Target Field and Kansas City’s Arrowhead Stadium, as well as selling over 55,000 tickets at Pasadena’s iconic Rose Bowl.

Just as important as the numbers are the people. Halfway through “I Go Back,” his songs as memory-capturing No. 1s, Chesney leaned into the crowd to high-five a young woman with Downs Syndrome, who yelled to come up onstage with him. Reaching his hand out, he helped lift the brown-haired girl onto the stage – and gave her a hug. Without missing a beat, the young lady announced, “I just want to let you know… Kenny Chesney is my true love,” to massive audience cheers. “He inspires me, and right now, I want to kiss him on the lips. Do you want to see it?”

Telling the crowd, “Okay, let me wipe the sweat off,” he laughed and did as the young woman asked. But the girl had more on her mind than a kiss from her favorite singer. Asking him for the mic again, he let her speak: “His music got me through the toughest times. His music inspires me. The reason why I want to be on the stage was because my grandfather’s dream was to see me up here, to sing with Kenny…” Pausing as the audience cheered, she looked at the 8-time Entertainer of the Year, then back at the crowd, “Do you want to see me sing more with Kenny Chesney? Because I’ve been doing it for 24 years…”

Chesney, who’d already confessed “it takes a lot to embarrass me” onstage, turned to the crowd, and announced, “This is the reason we write songs. Right there!” As the stage dropped to darkness, he took her hand, went to the main mic and hugged the young lady in the blue kurta top to his side as he sang his 27th No. 1, the wildly appropriate celebration of women, “Wild Child.”

“That young woman had so much heart, so much spirit,” Chesney said of his surprise guest. “She was just fearless and true and wanted to tell people what was on her mind. Talk about inspiring all of us about how to live our lives?”

Having hosted movie stars Reese Witherspoon, Vince Vaughn, Ashton Kutcher, rockers Joe Walsh and Grace Potter as well as NFL stars, baseball stand-outs and coaches of every stripe, East Rutherford, New Jersey’s surprise guest may well have topped them all. As the final weeks approach – including stops at Detroit’s Ford Field 8/22 and a tour-ending double at Foxboro’s Gillette Stadium 8/28-29, the man The Wall Street Journal called “The King of the Road” – who took 2013 off to make his No. 1 The Big Revival and then prep this tour — is reaching an intensity onstage even greater than when the tour kicked off in May.