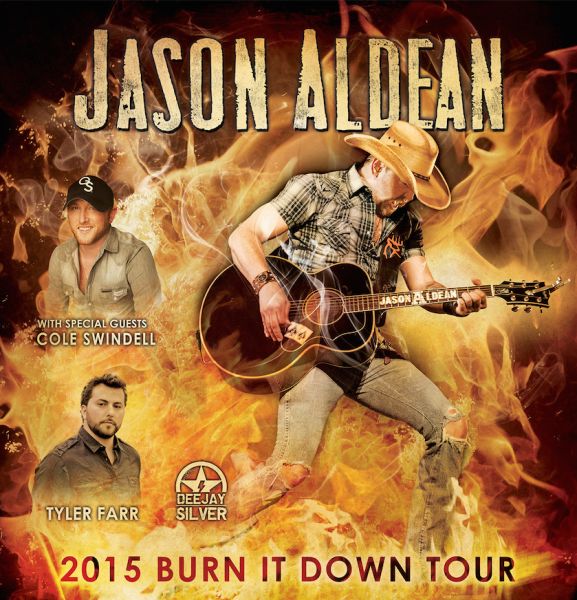 With other 54,000 fans in attendance at Sports Authority Field at Mile High in Denver, CO this weekend, Jason Aldean’s BURN IT DOWN TOUR has officially surpassed two million in ticket sales. Capacity crowds and triumphant stadium shows have been a common denominator for RIAA’s top digital country male artist of all time. Far from over, “the ideal country star” (Orlando Sentinel) has also already sold out upcoming stops at MetLife Stadium (8/15) and two nights at Boston’s Gillette Stadium (8/28, 8/29).

“I’ll always be surprised to look up and see that many people…the Aldean Army is rocking harder than ever,” said Aldean. “But the thing that really kills me is when I look up and see their faces and see how much these songs really mean to them. They are partying harder than anyone during the uptempo stuff and then when I think they may want to slow things down and catch their breath on the ballads, they are belting the words with so much passion…300 pound dudes are crying and hugging each other. Having that kind of effect on a stadium full of people is something I will never ever get used to.”

Dubbed by People as “the ultimate concert,” the record-breaking BURN IT DOWN TOUR continues through October with a special 10th Annual “Concert For The Cure” scheduled at his West Palm Beach tour date (10/24). Like years past, ACM’s three-time and reigning “Male Vocalist of the Year” has set aside a portion of ticket sales throughout the year, which will be donated to Susan G. Komen South Florida to support the West Palm Beach Area. New this year, Aldean has also been honoring two brave survivors at tour stops nominated through fan submissions.

For more information and a full list of tour dates visit www.jasonaldean.com.