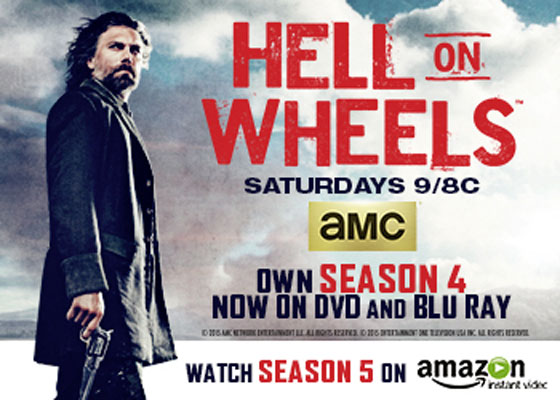 In addition, “Hell on Wheels” has returned for the first half of its fifth and final season. Seven new episodes will air this summer, with the final seven episodes of the series following in 2016.

Want to catch the series from the beginning??? We’ve got your chance to WIN a Blu-ray copy of Hell on Wheels: The Complete First Season and The Complete Second Season! To enter to win simply “Like” Country Music Rocks and Hell on Wheels on Facebook, . Five winners will be randomly selected to win Season 1 and Season 2 of AMC’s “Hell on Wheels” after contest closes on August 19. One entry per person. Prize only shipped within the US and Canada.

Hell on Wheels is a contemporary Western that centers on former Confederate soldier Cullen Bohannon, portrayed by Anson Mount, whose quest for vengeance has led him to the Union Pacific Railroad’s westward construction of the first transcontinental railroad. Developed by Endemol USA and produced by Entertainment One (eOne) and Nomadic Pictures, Hell on Wheels is created, written, and executive-produced by Joe and Tony Gayton (Faster, Uncommon Valor, The Salton Sea, Bulletproof).