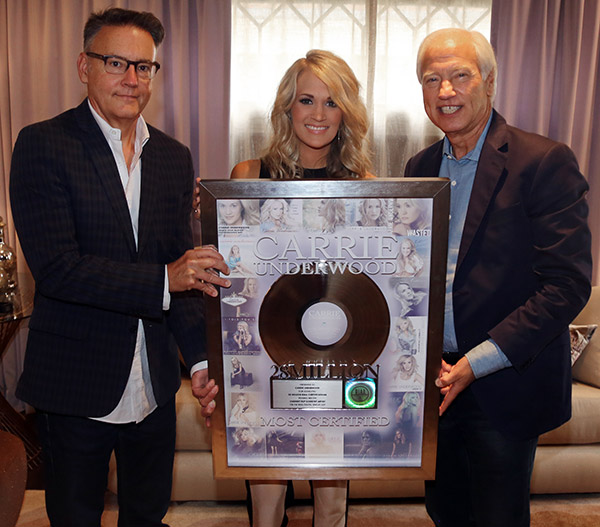 The songs featured on Carrie Underwood’s Greatest Hits: Decade #1 continue to demonstrate their mettle and their metal as Underwood earns new Recording Industry Association of America (RIAA) Gold & Platinum certifications of 4.5 million, making her the current top country artist on the RIAA’s Digital Single Ranking with certifications of 28 million across 20 songs.

The 28 million tally also places Underwood among the Top 5 females in the history of the RIAA’s Digital Single Program, in the company of such worldwide superstars as Rihanna and Katy Perry.

Among Underwood’s newest certifications is a Gold Digital Single for her most recent #1 smash, “Little Toy Guns,” as well as her highest RIAA Digital Single honor to date: a 5x-Platinum certification for her chart-topping blockbuster, “Before He Cheats.” With that accomplishment, Underwood becomes one of only five country artists in RIAA history to achieve that threshold with a digital single.

With the Gold status of “Little Toy Guns,” both new singles from Underwood’s Greatest Hits: Decade #1 have now been RIAA certified following the Platinum certification earlier this year of her chart-topping GRAMMY® Award winner, “Something in the Water.”

Underwood is currently working on music for her upcoming fifth studio album.