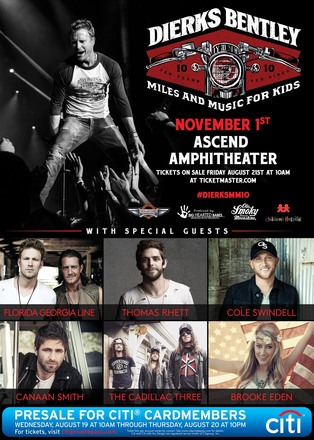 Multi-Platinum entertainer Dierks Bentley has announced that his 10th Annual “Miles & Music For Kids” celebrity motorcycle ride and concert, will kick off CMA Awards week on Sunday, Nov. 1 in Nashville, TN. Over the course of the event’s history, Bentley has raised more than $3 million dollars for Children’s Miracle Network hospitals across the country.

This year, he will be joined by an all-star concert lineup including Florida Georgia Line, Thomas Rhett, Cole Swindell, The Cadillac Three, Canaan Smith, Brooke Eden and emcee Storme Warren.

“When I think about all the artists and riders and fans who have come out to support this event over the years, I get a little emotional…there is just no way for me to possibly say thank you enough,” shares Bentley. “We started out at the fairgrounds and then moved out to the Loveless Café and then it grew so big we took it to Riverfront Park. And now we’ve got the new Ascend Amphitheater locked down for this year. We are going to do everything possible to make No. 10 the best yet!”

The 10th Anniversary celebration will once again begin at the Harley Davidson of Columbia (1616 Harley Davidson Blvd., Columbia, TN) for an hour-long ride that will end downtown at Nashville’s new Ascend Amphitheater to close out their inaugural season. Following the ride, Bentley will take the stage for a family-friendly day of music with a lineup that will continue to grow as the event approaches.

Dierks Bentley fan club members will have first access to presale tickets for the 10th annual “Miles & Music for Kids” this Tuesday (8/18) at 10:00A CT through www.ticketmaster.com. Citi is the official credit card of the event. Citi card members will have access to presales tickets beginning Wednesday (8/19) at 10A CT through its Private Pass program. General public tickets are available this Friday (8/21) at 10:00A CT, with individual concert tickets starting at $30, with special VIP rider and concert packages also available. All proceeds from the event will benefit Monroe Carell Jr. Children’s Hospital at Vanderbilt, a Children’s Miracle Network Hospital. For more ticket info, visit www.dierks.com.