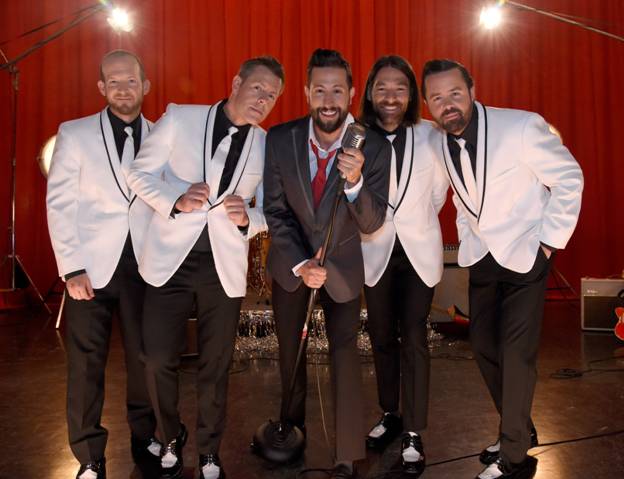 RCA Records Nashville’s Old Dominion music video for their debut single “Break Up With Him” is out NOW. The hit single is in the Top 15 on the country chart and only $0.69 on iTunes for a limited time. Get your copy here.

The thematic music video was shot in Nashville, TN during the annual CMA Music Festival in June and was directed by the aptly titled, Director Steve.

Old Dominion is currently in the studio putting the finishing touches on their debut album set to release via RCA Records Nashville late 2015. The untitled album comes on the heels of the gut-punch self-titled EP, which Rolling Stone Country says is dashed with “fuzzy guitars, catchy licks and even a little rap” and features the back porch smack of the undeniable first radio single “Break Up With Him” and the bruising “Shut Me Up,” and is the product of the five-piece band, which includes singer Matthew Ramsey, lead guitarist Brad Tursi, multi-instrumentalist Trevor Rosen, bassist Geoff Sprung and drummer Whit Sellers.

They’ve spent eight years honing their craft, each making a name for themselves in Nashville by penning songs for the likes of Kenny Chesney, Keith Urban, Luke Bryan, The Band Perry, Dierks Bentley and Tyler Farr. Now the band that The Tennessean describes as “a humble group of songwriters and musicians who earned their way in the music industry” is out on the road on Kenny Chesney’s The Big Revival Tour for 18 stadium performances plus over 170 tour dates of their own in 2015.