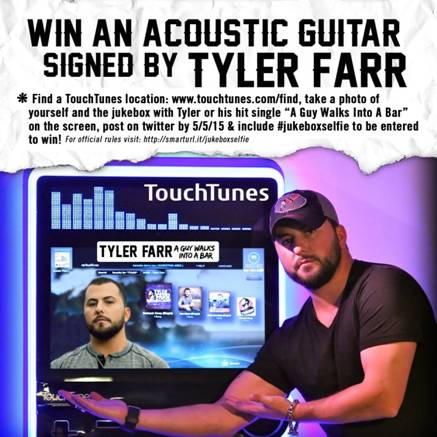 This past weekend Columbia Nashville’s Tyler Farr made a special appearance at the NRA Annual Meetings & Exhibits held in Nashville, TN. Farr performed an acoustic set for those in attendance and then as the crowd continued to grow, Farr stayed for an hour to sign autographs for the fans.

The appearance kicks off a week that will take Farr from Nashville to Dallas, TX for the Academy of Country Music Awards and 3rd Annual ACM Party for a Cause® Festival where Farr will perform on the Party Stage, Saturday, April 18 at 3:05 PM. Prior to taking the stage to perform his hit songs “Redneck Crazy,” “Whiskey In My Water” and his current Top-10 hit “A Guy Walks Into a Bar” Farr will appear at the 3rd Annual ACM & Cabela’s Great Outdoor Archery Event hosted by Luke Bryan and Justin Moore.

Leading up to the release of Suffer In Peace, Tyler has also partnered with TouchTunes, the largest in-venue music and entertainment network in 60,000 bars and restaurants nationwide, for “Tyler Farr’s Jukebox Selfie” photo contest. The contest encourages guys (and gals) across the country to “walk into a bar” and tweet a photo of themselves alongside a TouchTunes jukebox with Tyler’s hit single “A Guy Walks Into a Bar” displayed on the screen. Participants will be directed to post their photo on twitter and tag it with the hashtag #JukeboxSelfie for a chance to win an autographed guitar by the Missouri native. To find nearby TouchTunes locations, fans can visit www.touchtunes.com/find. For official rules, click here.