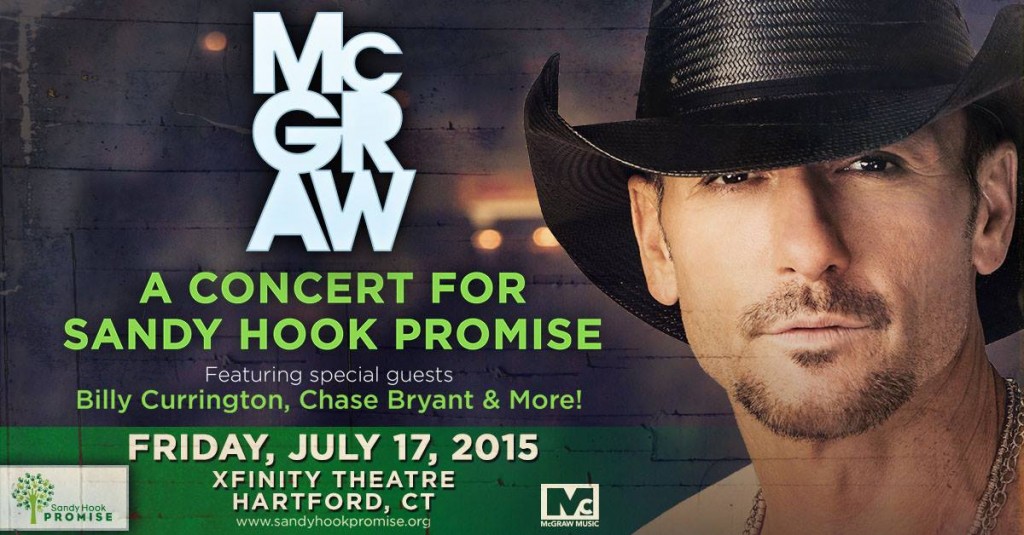 Tim McGraw has announced that on July 17, 2015 at XFINITY Theatre in Hartford, Connecticut, he will headline a Concert for Sandy Hook Promise. One-hundred percent of the net proceeds of this special event will benefit Sandy Hook Promise, an organization founded in the wake of the shootings at Sandy Hook Elementary School in Newtown, Connecticut, with a mission of protecting children from gun violence.

Tickets for “Tim McGraw:  A Concert for Sandy Hook Promise” go on sale this Friday, April 17, 2015 at 10 a.m. through LiveNation.com and Ticketmaster. Charge By Phone 800-745-3000.  Featured performers will include current tour mates Billy Currington and Chase Bryant, along with special surprise guests to be announced later.

“Out of this tragedy a group was formed that made a promise to honor the lives lost and turn it into a moment of transformation,” said McGraw. “Sandy Hook Promise teaches that we can do something to protect our children from gun violence. I want to be a part of that promise – as a father and as a friend.”

This cause is close to Tim’s heart, as it is to the fiddle player in his touring band, Dean Brown, a longtime friend to Mark Barden, a musician and father of a child, who was killed in the 2012 tragedy. “I look forward to being a part of a night of hope and promise and music that will help continue the great work that Sandy Hook Promise is doing,” said Brown.

“We are humbled that Tim would do this for us,” said Barden. “Dean and his wife Cindy helped my wife and I through our darkest hour and helped buoy our spirits.  It meant more than words could ever say.”

To donate directly to Sandy Hook Promise go to sandyhookpromise.org.