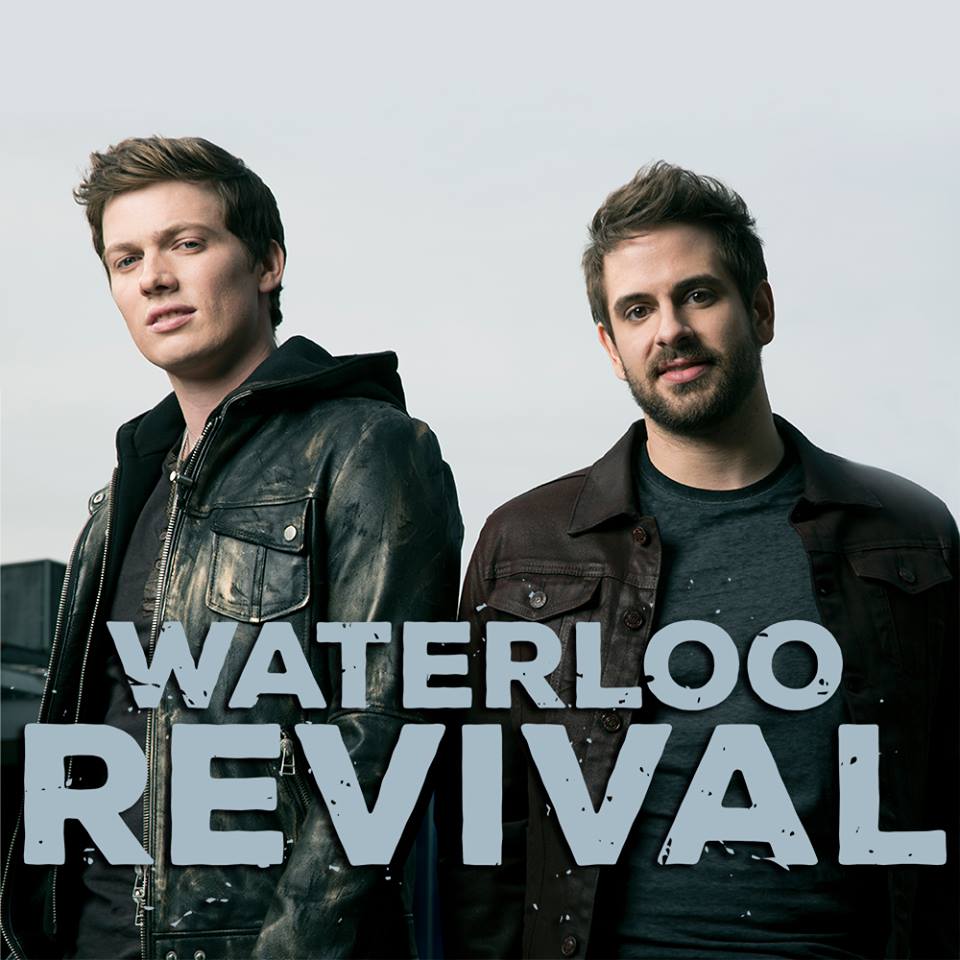 You may not know much about Waterloo Revival yet, but you should!! In fact, why not start right now?!?! The duo, comprised of George Birge and Cody Cooper, recently released their debut single, “Hit The Road,” to country radio. Signed with Big Machine Records, George and Cody have embarked on an amazing journey ahead in country music.

One of the first things we wanted to know about Waterloo Revival was their name. When they say you learn something new everyday, it’s true! George shared with us the interesting story behind their unique band name. “Cody and I are from Austin, TX and lived there our whole lives. The city has had a huge influence on us growing up, especially the musical aspect of it. Austin, way back in the day, was called Waterloo. We kind of made it our goal to carry the torch for Austin music to the rest of the country, but Austin Revival was not a very cool band name. We felt like Waterloo Revival sounded a little bit better.”

Their debut single “Hit The Road” was born about 8 months ago. Their producer insisted they had one more song in them for their project and wanted the guys to fly out to Nashville to meet up with Dustin James. George recalls, “We flew out to Nashville for our first time ever, and it was our first time writing with somebody outside of each other. So the 3 of us, Cody, Dustin and I, sat down in a room and in an hour and a half we had written Hit The Road.”

Birge continues, “I think we all knew it was something special when it came out, but it wasn’t until we recorded it and got it in the hands of TK Kimbrell that we had a clue of what it was going to do for us. TK Kimbrell is Toby Keith’s manager, and he is now our manager. He signed us based on the single and got it on Scott Borchetta’s desk, president of Big Machine. Scott loved the song as well. We were able to quit our day jobs and move to Nashville. Now we are touring around the country, and playing music. The song has been pretty special to us.”

Scott Borchetta is a well-know name in the music industry. He clearly believes in the talented duo and what they have to offer to the country music genre. Cody shared, “It was just a really surreal experience. We were making the move out to Nashville from Austin, and we were in the process of talking to labels. If you had given us our top choice of labels to join, it would have been Big Machine. Primarily because of Scott, their track record and all that. To have him say that he loved the song, and our music and wanted to sign us, was a crazy surreal moment. He was our manager TK’s top pick.” The duo laughed and recalled their manager’s “joke” during that time. “He said If you guys get an offer from Scott, I don’t care what it looks like, you guys are gonna sign.”

Clearly things worked out on paper because it was a pretty quick turnaround from their time in Nashville, to signing with the major label. “In October of 2014 we went to Nashville and played a showcase,” said George, “and two weeks later we signed with Big Machine Records.”

Since signing their deal with Big Machine Records, George and Cody have “hit the road” running on a nationwide radio tour. They’ve been impressing country radio, and country fans, with their new music. The two have been on the road pretty much non-stop lately. While they fuel themselves with coffee and beef jerky, which are must-haves for them, they always make sure they have workout clothes out on the road with them. “You kind of have to make your own time to work out on the road. We’ll wake up in the morning and do a radio interview, then go to a radio lunch and then go to a radio dinner. So with the two hours you get during the day, you’ve got to kind of make your own time to go work out at the hotel.”

In addition to their radio tour, the duo is also in the process of recording the rest of their debut album. While “Hit The Road” is currently available on iTunes, both Cody and George are anxious to get new music into the hands of fans. Of their debut album, Waterloo Revival indicates “It’s not a huge departure from “Hit The Road.” We stayed true to our style.”

The duo will be showcasing their new music throughout this year with live performances. Once they wrap up their radio tour, Cody & George have several dates lined up where they will be opening for Brett Eldredge, Eric Paslay and many more.

Listening to the duo’s excitement, talking about their new music and what’s ahead for them this year, made us excited and curious about their live shows. When asked how they would best describe their live performance, George shared, “I would say high energy. Being on stage is our favorite place in the world to be, and our drug is the reaction from the audience. So when the audience is in to it, it’s like we can’t get enough of it.

Speaking of fans, when asked what they thought separates country music apart from any other genre and really stand out, they immediately thought of the fans and their loyalty to country artists. George explained, “I would say the fans. In so many other genres the stars have a meteoric rise to the top, and a meteoric fall to the bottom. I think once you break out in country music, the fans are behind you forever. They stand by the people that have stuck around forever and are still relevant. Like Tim McGraw. He’s had #1 after #1, and he’s still got #1’s going, and that’s because the country fans connect with him and keep him there. So I think they’re a really loyal audience, and a really moral based audience, which makes us really glad to be a part of that. Because Country Music, I would say it’s not up for debate, has the best fans hands down out of any other genre.”

In addition to the fans, Cody also added that the genre is like a community. “Country music is different than a lot of other genres, it’s more of a community than any other genre. Especially country radio…it’s all about friendships, and relationships and support.”

Great things are definitely on the immediate horizon for Waterloo Revival. We are excited to watch George and Cody grow, and they make for a great addition on the country radio airwaves.

Pick up their debut single “Hit The Road” available on iTunes HERE.  Also be sure to request their new song at your local country radio station.