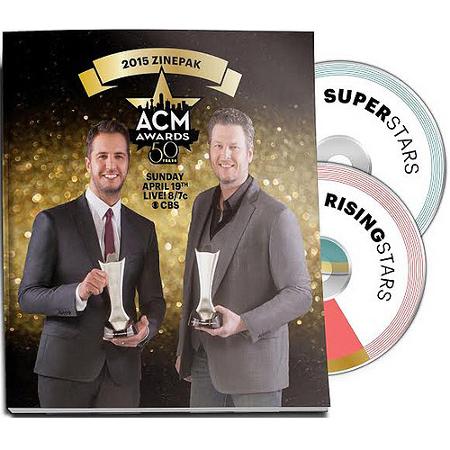 This year’s 50th Anniversary collection includes two compilation CDs, a 96-page magazine, an ACM Awards nominee ballot, and a window decal. The ZinePak will be available at Walmart stores nationwide beginning on March 24, leading up to the LIVE broadcast from AT&T Stadium in Arlington, TX on Sunday, April 19, 2015 at 8:00 PM live ET/delayed PT on the CBS Television Network. It is currently available for pre-order here.

In addition to exclusive interviews with more than 25 artists, the magazine gives fans an inside look at the Academy, including the 50-year history behind the organization and the Awards. Fans will also have access to more than 15 exclusive videos powered by the free ZinePak All Access app, available for download in the iTunes App Store and Google Play.

The package, which is strictly limited to 50,000 copies in a nod to the anniversary of the ACM Awards, is currently available for presale at Walmart.com. It will be available in the music department in Walmart stores nationwide beginning March 24. The first 1,500 fans to pre-order online will receive an additional window decal. Coors Light, a 20-year sponsor of the Academy of Country Music Awards, is sponsoring the ZinePak for a third year in a row, allowing the package to retail for the super-low price of $10.