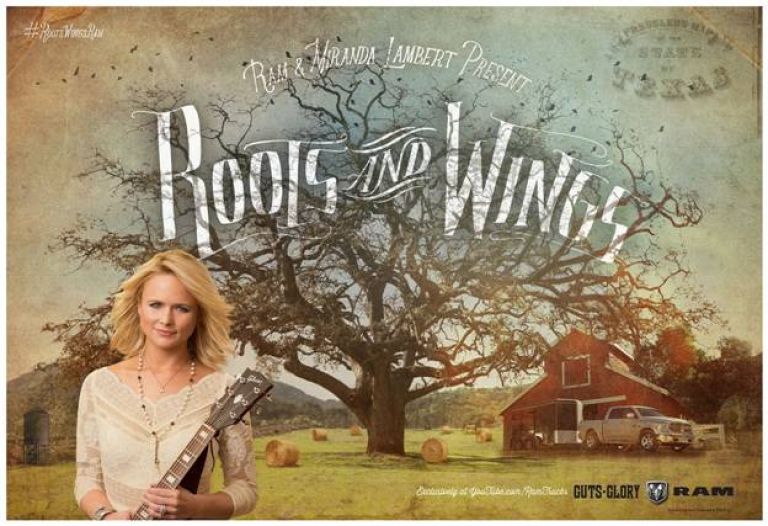 The campaign includes television, print, digital, social media and long-form video elements and is the next phase of the partnership between Lambert and Ram first announced in November. The new creative, breaking this week on various network and cable channels, coincides with Lambert’s current “Certified Platinum Tour” and includes cross-promotion and branding at many concert venues.

“Ram has become the fastest growing truck brand by challenging the status quo, and our partnership with Miranda Lambert does just that,” said Olivier Francois, Chief Marketing Officer, FCA – Global. “Building a new marketing campaign around the hugely successful and popular country music artist, and her original song inspired by the characteristics of our brand, is a first for Ram. It is courageous, just like Ram and Miranda. It will broaden the appeal of both of our brands beyond our core audiences as we connect with our respective fans in new, meaningful ways.”

Lambert’s story is creatively told through live action video combined with illustrations, animation and vintage styling. Many of the landscapes are actual locations that are part of Lambert’s life and all of the featured still photos are her personal family photos. “Roots and Wings” is the soundtrack of the television spots and the brand’s trademark “Guts. Glory. Ram” visuals close the spots.

“I am very inspired by what the Ram brand stands for – being who you are, working hard, staying true to your roots,” Lambert said. “I wanted to write a song that would represent all of those things. ‘Roots and Wings’ is personal to me about where I come from and where I am going. The guys at Ram really made the lyrics come to life with the imagery and I hope it speaks to people the way it does to me.”

“Miranda Lambert is a perfect partner for Ram,” said Robert Hegbloom, President and Chief Executive Officer, Ram Brand, FCA – North America. “In our very first meeting we saw the connections between her core values and those of the Ram Truck brand – common traits like hard working, determined, goal-oriented, tough and a driving purpose to perform brilliantly at the highest levels. She’s been around trucks her entire life, from being born on a farm to owning a ranch now, and she lives her life by her own rules just like so many of our Ram truck owners.”

“Roots and Wings” video elements include 30- and 60-second television commercials launching Jan. 22 on broadcast and cable networks. A 15-second digital spot will also run on targeted media. Campaign videos can be seen at youtube.com/ramtrucks.

The first print ad will run in the Feb. 2 edition of Country Weekly magazine, where Miranda is on the cover.

Lambert and Ram will both share the “Roots and Wings” creative elements, behind-the-scenes video footage and upcoming partnership announcements on their respective social media channels.

The Miranda Lambert and Ram partnership also will be evident at Lambert’s concert venues on her “Certified Platinum Tour” currently underway. The 60-second “Roots and Wings” video will be played just before Lambert takes the stage after intermission and in-venue creative displays will also be visible. The silver Ram 1500 Laramie Longhorn, just like the one Lambert owns, is the Official Truck of the Certified Platinum tour, and will tow Lambert’s Airstream trailer, “Wanda the Wanderer,” to each venue. The truck will also be on display, allowing fans who attend the concerts to post pictures at #RootsWingsRAM for a chance to win a Miranda Lambert and Ram prize pack.

The campaign was created in partnership with Ram Trucks’ advertising agency Dallas-based The Richards Group and Nashville-based G7 Entertainment Marketing.

The relationship between Ram and Lambert was announced in November 2014 with Lambert auctioning off a customized Ram Laramie Longhorn truck and personal memorabilia to benefit her MuttNation Foundation. The auction raised nearly $66,000 for the charity whose purpose is to better the lives of shelter animals.