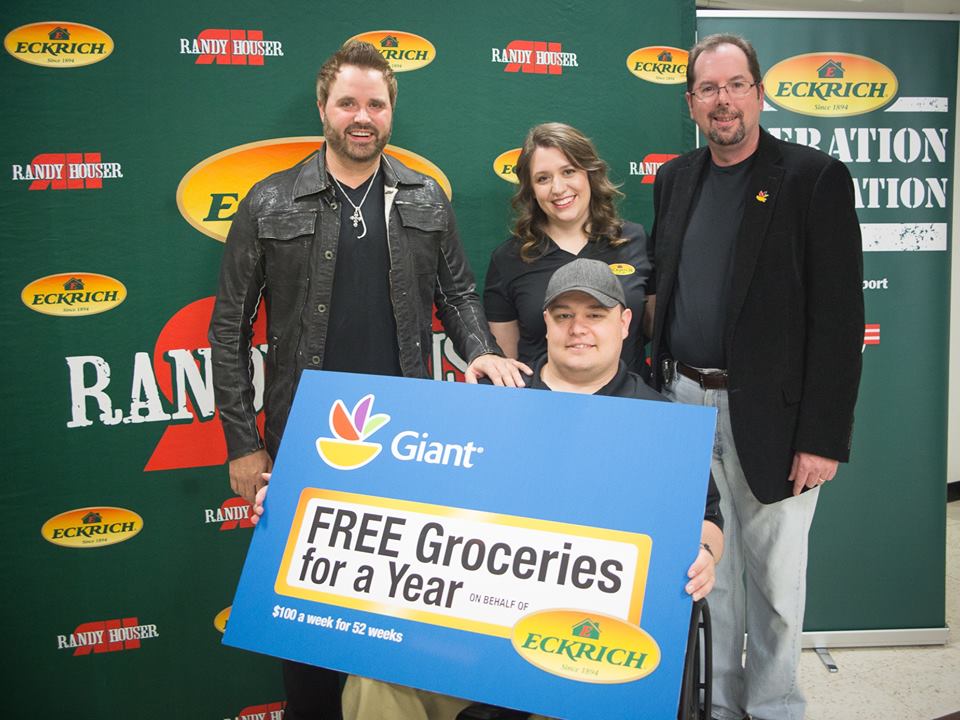 Platinum-selling country music star and American Country Countdown Awards Male Vocalist of the Year nominee Randy Houser partnered with Eckrich to honor a military family with a night of surprises on November 22, during Houser’s appearance at Royal Farms Arena in Baltimore, Md. as part of Dierks Bentley’s Riser Tour.

The special event began with Air Force Staff Sergeant Christopher Solso and wife, Clare, being escorted backstage for a surprise meeting with Houser, during which he and GIANT Foods presented the family with a year of free groceries on behalf of Eckrich and invited the Solsos on an all-expenses paid getaway to Tucson, Ariz., where they will enjoy a VIP experience at a Randy Houser concert and visit the historic site of his hit music video, “Like A Cowboy.” Written by Houser and Brice Long, the single is currently in Billboard‘s Top 15 and climbing at country radio.

During the VIP trip to Tucson, Ariz., the Solsos will have an action-packed weekend including a tour of the film studio and site of the epic “Like A Cowboy” music video, which was shot at the same studio where classic Western sagas including Joe Kidd, The Frisco Kid, and Tombstone were filmed. They will also be treated to a VIP experience at Houser’s concert on December 14, including another opportunity to spend time with Houser before the show.

This is Houser’s first year supporting Operation Homefront families and partnering with Eckrich, part of the John Morrell Food Group, a subsidiary of Smithfield Foods, Inc.  Throughout the year, Houser has hosted many military families at his concerts and provided them with a variety of special experiences and surprises from Eckrich, which has already provided more than $50,000 in free groceries to military families this year.

“I’m excited for the Solso family to experience the trip to beautiful Tucson,” said Houser. “They’re going to have such a great time exploring the scenic region, touring the sets of the music video, and seeing the show at the historic Fox Theatre. Being a part of ‘Operation Inspiration’ and getting to meet with military families like Christopher and Clare Solso is such an honor. I am proud to have been a part of this surprise and can’t wait to see them again in December.”

Houser also presented the family with an autographed guitar from Eckrich as a keepsake to remember the special night.

“The Eckrich ‘Operation Inspiration’ campaign has been a great opportunity to give back to our military families,” stated Chuck Gitkin, vice president, marketing, innovation and R&D for the John Morrell Food Group.  “Supporting and honoring military families who sacrifice for us every day to keep us safe, is important to us.  We’re proud to have partners like Randy Houser and GIANT who are great partners.”

The surprise trip, year of free groceries, and guitar are all part of the Eckrich “Operation Inspiration” campaign, which supports and honors military families with nonprofit partner Operation Homefront.  In its third year of partnership with Operation Homefront, a national nonprofit which provides emergency financial and other assistance to the families of service members and wounded warriors, Eckrich has already donated more than $750,000 to the organization.

In addition to headlining his own dates, Houser will continue his trek on Dierks Bentley’s Riser Tour through the end of the year and will join Luke Bryan’s That’s My Kind of Night Tour in early 2015. For more information on Houser’s partnership with Eckrich and “Operation Inspiration,” please visit www.facebook.com/EckrichMeats.