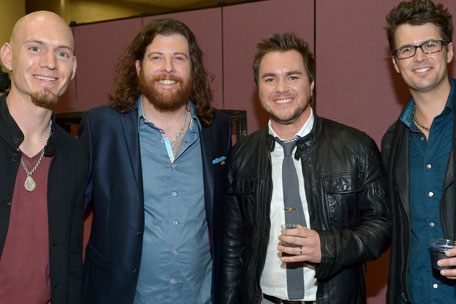 Military, Music and Wings – it’s a triple threat combination! As part of its “Battle of the Bases” contest, Pizza Hut and the Army Air Force Exchange Services (AAFES) partnered with 2014 CMA Award Vocal Group of the Year nominee Eli Young Band to reward Camp Schwab Military Base and neighboring Okinawa bases with a complimentary “Wing-A-Palooza” concert on November 1, 2014 for eating the most Pizza Hut wings among 30 installations worldwide.

Consuming more wings than their fellow service men and women, Camp Schwab in Okinawa, Japan won the contest and along with neighboring Okinawa military bases will enjoy a real treat on Halloween weekend filled with good music, food and the company of EYB lead singer Mike Eli, guitarist James Young, drummer Chris Thompson and bassist Jay Jones. AAFES, more commonly referred to as The Exchange, operates the 30 participating Pizza Hut locations on the military bases and does not make a profit. Rather all monies made by The Exchange are reinvested to make lives better on the US Military bases. The Exchange and Pizza Hut worked together to host the competition and concert.

“Working with AAFES on the inaugural ‘Battle of the Bases’ program has been a tremendous experience and opportunity for Pizza Hut to serve up some of our award-winning WingStreet wings to our military and their families,” said Molly Light, Director, Pizza Hut Express. “We chose Eli Young Band not only because of their local roots, but because of their tremendous passion for the armed services and personal affiliations with family and friends currently serving.”

“We all have family in the armed forces, so we jumped at the opportunity to fly to Japan and perform for these men and women that sacrifice so much,” said Eli Young Band. “We’re excited to team up with a company from our own backyard. We’ll always be honored to perform for our military and truth be told we’ve also never said no to pizza either.”

For more information and the latest brand happenings or to order WingStreet wings, visit PizzaHut.com.