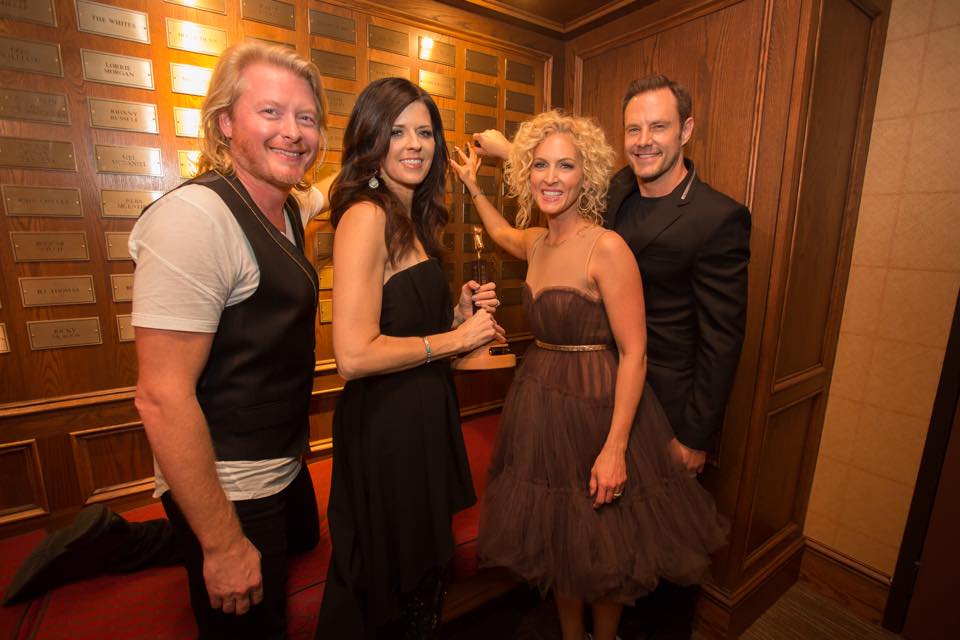 The critically acclaimed Grammy®-winning vocal group Little Big Town (Karen Fairchild, Phillip Sweet, Kimberly Schlapman and Jimi Westbrook) were formally inducted into the Grand Ole Opry Friday evening (10/17) by Opry members Little Jimmy Dickens and Vince Gill. The group had been invited to join the Opry on October 3rd by Opry member and friend Reba McEntire. The night marked a major milestone for the group whose first-ever public performance together was on the Opry in 1999.

The group opened its set with a performance of its hit “Bring it On Home,” hearkening back to its Opry debut. On that night, as the members recalled backstage, they had been accompanied by only a borrowed guitar. After the group’s performance of the smash “Boondocks,” Dickens and Gill took the stage along with Opry Vice President and General Manager Pete Fisher to present the group with its Opry Member Award.

“The word ‘family’ really means something out here. It really does,” Gill said to the group. “You’ll make friends like I have with this man right here,” he continued, nodding to Dickens. “You’ll be so be blessed by the friends you’ll make out here, and they’ll last your entire life. Welcome to the family, and remember to come here as often as you can.”

After the group shared its thanks to the Opry, family members, friends, and others who’d helped make its Opry dream come true, the members invited Gill to join them on their final song of the night, the Kris Kristofferson classic “Why Me.” “Welcome them home!” Gill cheered before a standing ovation sold out audience.

Backstage, group members reflected on having grown up with the Opry and on its importance to their music. “This feels like the biggest moment of our lives and our career,” Schlapman said.

“I’m so excited about sharing this moment with the band,” Fairchild added. “We’ve been through the highest of highs together, and this is sure to be the highest. This is as good as it gets.”

Sweet reflected on everyone at the Opry having embraced the group over the years. “It feels like home,” he said. “It’s family.”

“There’s nothing like walking those halls backstage,” added Westbrook, later sharing amazement with the other members that the group’s name would be added to the Opry Member Gallery at the Opry House backstage entrance.