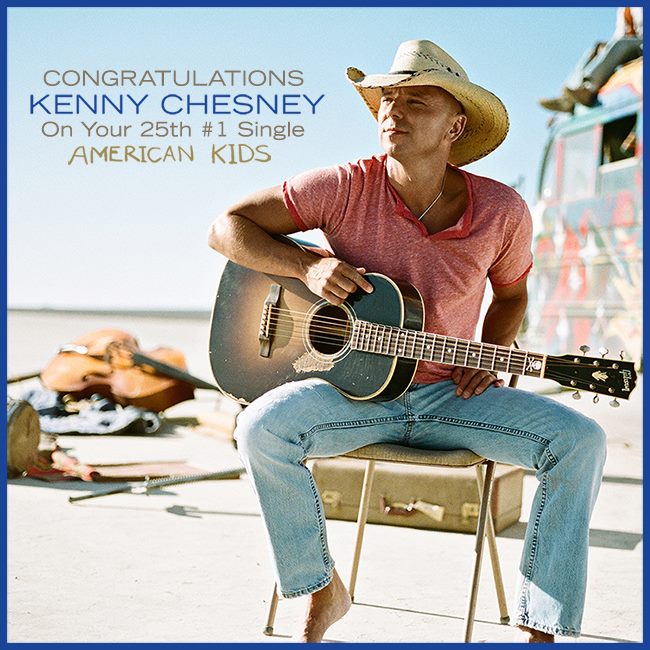 Kenny Chesney knew he wanted to take his music to another level when he opted to spend 2014 working on a new album. When he found “American Kids,” the lead single from Sept. 23’s eagerly anticipated The Big Revival, he knew he had something unlike anything he’d ever cut before.

Three weeks before his album hits stores, the propulsive song about the inherent spirit of people coming of age in the flyover has topped Billboard’s Country Airplay chart – and it shows no signs of slowing down. With three rhythms, two hooks and a whole lot of imagery, “American Kids” paints a portrait of people who make their own fun, understand life is how you live it and that the small details are what it’s all about.

“When Shane (McAnally) played me the song,” Chesney says, “I knew I was going to cut it. In fact, I gave him a hard time for not playing it for me sooner. Not only is it musically so engaging, but the pictures it paints are undeniable! No matter where you’re from, there are pieces of that song that’re just who you are… and they show you at your very best. We’re all, like the song says, ‘a little messed, but we’re all alright’.”

More than a little alright. Having just played a free show for over 40,000 in FloraBama and a surprise “pop-up” show in Athens’ Georgia Theatre, Chesney marveled as both crowds gave the tongue twisting lyrics back to them like they were born singing it.

“Some songs, you just know they capture how people feel, what they think, how they are,” offers the man called “the people’s superstar” by The Los Angeles Times. “I’ve had a few like that: ‘Young’ being the first. The moments in this song are all very real, and while they’re universal, they’re anything but generic, so I think people grabbed a hold of it for that – and because of the way it moves.”

Written by Rodney Clawson, Luke Laird and Shane McAnally, “American Kids” evokes the little pink houses and born in the USA of several generations, while embodying the swept-up-in-the-moment urgency and complete abandon of today’s teens and 20-somethings.

Co-producing with longtime collaborator Buddy Cannon, The Big Revival marks Chesney’s 15th studio album. With the emphasis on great songs, pushing the boundaries without betraying who he is, The Big Revival takes Chesney’s music and lays it wide open. With its first #1 in “American Kids,” it looks like the songwriter/entertainer’s next wave is going to break ground and make his fans really happy.