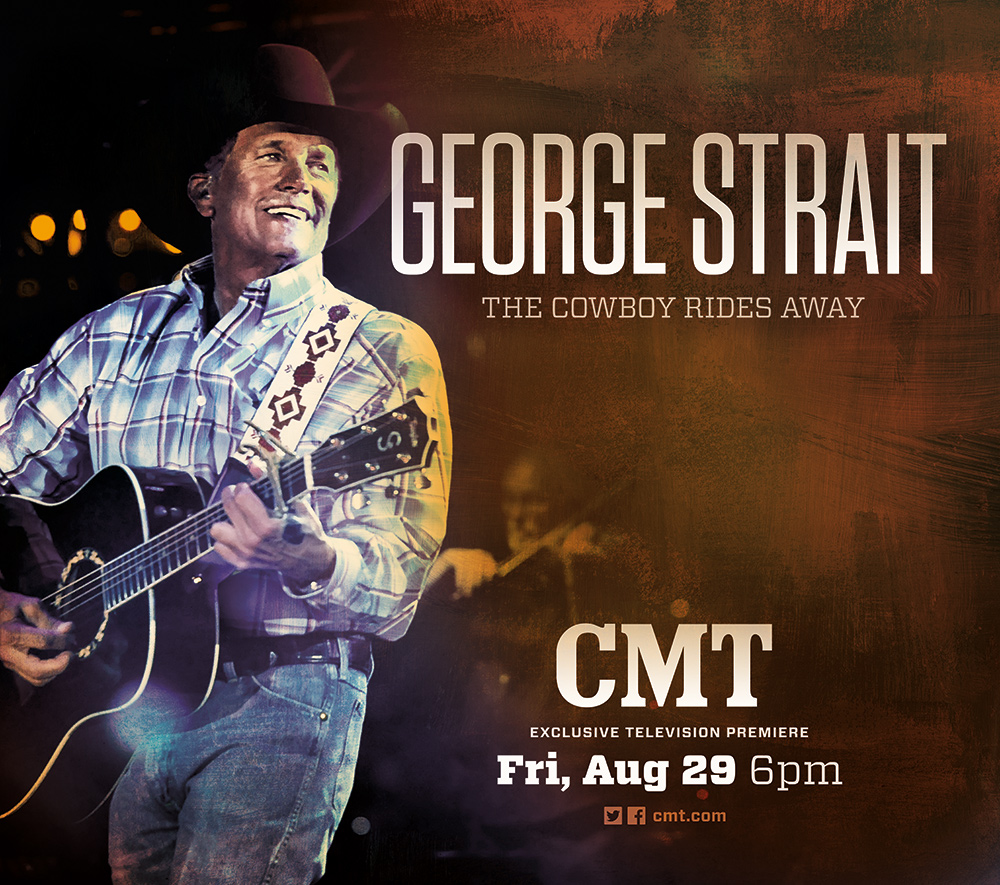 It was a concert fit for a king. Filmed live from his final show in Dallas, Texas, CMT is set to premiere an exclusive two-hour television special GEORGE STRAIT: THE COWBOY RIDES AWAY on Friday, August 29 at 7:00-9:00 p.m. ET/PT.

GEORGE STRAIT: THE COWBOY RIDES AWAY is an historical account told through the music from the superstar’s storied career. The special features new interviews with Strait, along with a selection of his incredible 60 No. 1 hits performed at the farewell tour, including “Fool Hearted Memory,” “I Can Still Make Cheyenne,” “Check Yes Or No” and “The Cowboy Rides Away.”

“We wanted to make it something different, something very, very special, something that people didn’t necessarily think they would see at one of my shows – not all of the fireworks and all that kind of thing, but just something a little different,” says George on why he chose to have so many special guests. “Since we toured with those people all year, we planned on this, getting them, if they would, to come and finish it out in Dallas with us. I think it really made the night more special than it would have been if I’d just gone up there and done my normal show.”

The special features new interviews with Strait, along with a selection of his No. 1 hits performed during the farewell tour, including “Fool Hearted Memory,” “Ocean Front Property,” “Murder on Music Row,” “I Can Still Make Cheyenne,” “Check Yes or No” and “The Cowboy Rides Away.”

His final date of The Cowboy Rides Away Tour on June 7th shattered indoor concert attendance records for North America with more than 104,000 fans. The reigning ACM and CMA entertainer of the year amassed more No. 1 singles than any artist in any genre and is the only artist to chart a Top 10 hit every year for 30 years.

George is offering fans a 20-track live album recorded at this historic show at AT&T Stadium, due in stores September 16th.

He’ll continue to record new music for longtime label home MCA Records and at some point, plans to perform a few select dates.

The Cowboy Rides Away: Live From AT&T Stadium Track Listing:
1. Check Yes Or No
2. The Love Bug (with Vince Gill)
3. Fool Hearted Memory (with Jason Aldean)
4. Arkansas Dave (with Bubba Strait)
5. Cowboys Like Us (with Eric Church)
6. That’s What Breaking Hearts Do
7. Marina Del Rey
8. Here For A Good Time (with Sheryl Crow)
9. I Can Still Make Cheyenne
10. Jackson (with Martina McBride)
11. A Showman’s Life (with Faith Hill)
12. Murder On Music Row (with Alan Jackson)
13. The Chair
14. Give It All We Got Tonight
15. Run (with Miranda Lambert)
16. I’ll Always Remember You
17. Ocean Front Property (with Kenny Chesney)
18. Troubadour
19. All My Ex’s Live In Texas (with Jason Aldean, Ray Benson, Kenny Chesney, Eric Church, Sheryl Crow,
Vince Gill, Faith Hill, Alan Jackson, Miranda Lambert, Martina McBride)
20. The Cowboy Rides Away