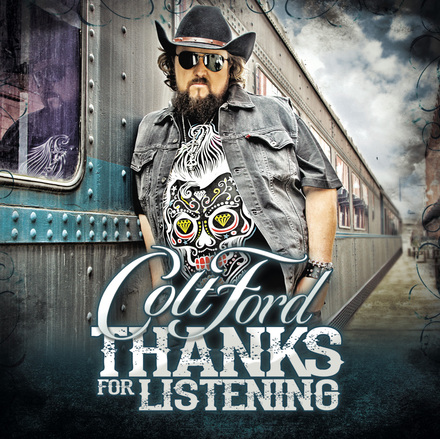 With his groundbreaking blend of country music with hip-hop grooves, country artist, Colt Ford, is a cultural force on the verge of going from cult status to a household name with the release of his 5th Average Joes Entertainment studio album, “Thanks For Listening,” July 1, 2014.

Available everywhere music is sold, an exclusive version of the album sold at Walmart will include a 64-page color comic book, “The Average Joes,” featuring Colt Ford and friends as super heroes selflessly saving the world with their super powers. Pre-order the album here.

Produced by Shannon “Fat Shan” Houchins, Noah Gordon, Phivestarr Productions  and Kevin Kadish, “Thanks For Listening” is a celebration of the things near and dear to Colt Ford’s heart – America, country music, hard work, celebrating life with family and friends and simply having a damn good time in the process.

The brand new 12-song collection features collaborations with such friends as Keith Urban (“She’s Like”), Duck Dynasty’s Boss Hog, Willie Robertson (“Cut ‘Em All”), Jerrod Niemann (“Crickets”), Randy Houser (“Washed In The Mud”), Justin Moore (“Farm Life”), Chase Rice (the first single, “The High Life”), Lee Brice (“Sip It Slow”), Walker Hayes (“Dirty Side”) and Daniel Lee (the title track).  Also, for the first time, Colt reveals his growth as an artist by including three solo songs on the new offering:  “Workin’ On,” “Crank It Up,” and “Outshine Me.”

Commenting on the new album, Ford said: “I think it’s the best record I’ve ever done. Its got a lot of the different elements that I do well, and I push myself on some other things. The idea is to try to grow as an artist and still be who you are, and not completely forget to give the fans what they like. I’ve never been more excited by new music than this.”

Connecting with fans everywhere through his live performances, music, and social media, Ford’s popularity continues to skyrocket. His loyal, ever-growing fan base includes 1.4 million Facebook Fans and 250,000 Twitter followers. He has scored a #1 album on Billboard, has sold over 1 million albums and millions more tracks.  Ford can currently be seen sharing the bill with Toby Keith on his “Shut Up and Hold On” tour this summer.