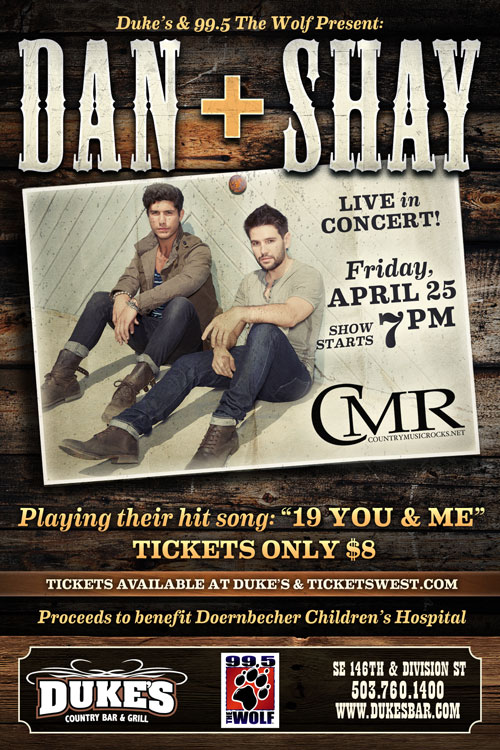 Warner Music Nashville Recording Artists and ACM Nominees Dan + Shay are gearing up to release their debut album, WHERE IT ALL BEGAN, on April 1.

To celebrate the release of their debut album, Dan Smyers and Shay Mooney will be making their way to the Pacific Northwest on April 25 for Duke’s & 99.5 The Wolf Presents: Dan + Shay to perform a Low Dough Show.  A portion of the proceeds will benefit OHSU Doernbecher’s Children’s Hospital.

CountryMusicRocks has your chance to WIN a pair of tickets to check out Dan + Shay and see them perform their hit single “19 You + Me” live, plus a set list full of great songs from their debut album. To enter to win a pair of tickets, simply “like” Country Music Rocks and Dan + Shay on Facebook . Six winners will be randomly selected after contest closes April 13. One Entry Per Person. 21+ Only. No travel and/or accommodations included.  Good Luck!


Pre-Order Dan + Shay’s debut album WHERE IT ALL BEGAN on iTunes HERE, and get ready to sing along with them on April 25 at the show!

Country Radio Station 99.5 The Wolf and Duke’s Bar and Grill will be sponsoring this Low Dough Show, with a portion of the proceeds benefiting OHSU Doernbecher’s Children’s Hospital.  Tickets are only $8 and will no doubt sell-out quickly! Grab your tickets HERE! This event is 21 & over only.

One reply on “CONTEST: Enter To Win A Pair of Tickets To See Dan + Shay in Portland April 25”