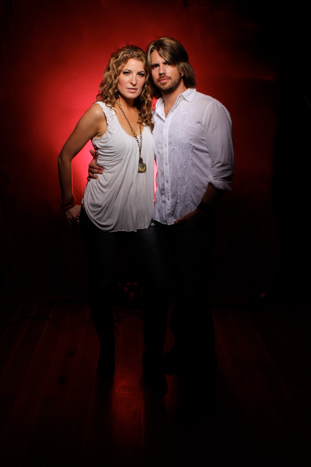 Country duo Cloverdayle, comprised of husband & wife Chad and Rachel Hamar, is gearing up to release brand new music. Natives of the Pacific Northwest, the duo made the move to Music City last year and have been working on their upcoming release. Returing to their roots, Cloverdayle will make their way home back to the Northwest where they will unveil their brand new EP with a special CD Release Concert.

To celebrate the release of their new EP, major market country radio station 99.5 The Wolf will give listeners an exclusive sneak peek into Cloverdayle’s new music with the premiere of new single “That’s Why I Love You” on Wednesday, March 26, at 7:40pm PST.

Of their new music, Chad and Rachel shared “Although we live in Nashville now, the Northwest has played a HUGE role in building Cloverdayle since we launched in the spring of 2008.  Whenever we have something new, (like this EP), having a special release concert in the Northwest and debuting a song on the local country radio station is just another way of saying “thank you” to those loyal fans.  We are very much a grassroots, fan-built and fan-driven band so we chose “That’s Why I Love You” to be the first song to premiere from the new EP because it’s a side of Cloverdayle our audience has yet to hear, (and we think they’re going to be surprised).  We’ve definitely taken some risks and pushed ourselves creatively, but we couldn’t be more excited about this next chapter!”

Once again, Chad and Rachel deliver a solid track with new single “That’s Why I Love You.” Listeners will easily identify with this song as it brings attention to why we love our significant other. Between the blend of Rachel and Chad’s vocals, coupled with the appealing melody, “That’s Why I Love You” will certainly resonate with country music fans.

Be sure to hear the exclusive premiere of “That’s Why I Love You” on Portland’s 99.5 The Wolf on Wednesday, March 26, at 7:40pm PST. You can also tune-in online at www.thewolfonline.com.  You won’t want to miss this!

In addition, grab your tickets to Cloverdayle’s Special CD Release Concert at Southlake Auditorium in West Linn, OR. Not only will you get to see the incredible duo perform, but you’ll also be able to purchase their brand new EP before it is available anywhere else! Grab your tickets HERE.

4 replies on “Cloverdayle To Premiere New Single “That’s Why I Love You” on 99.5 The Wolf”