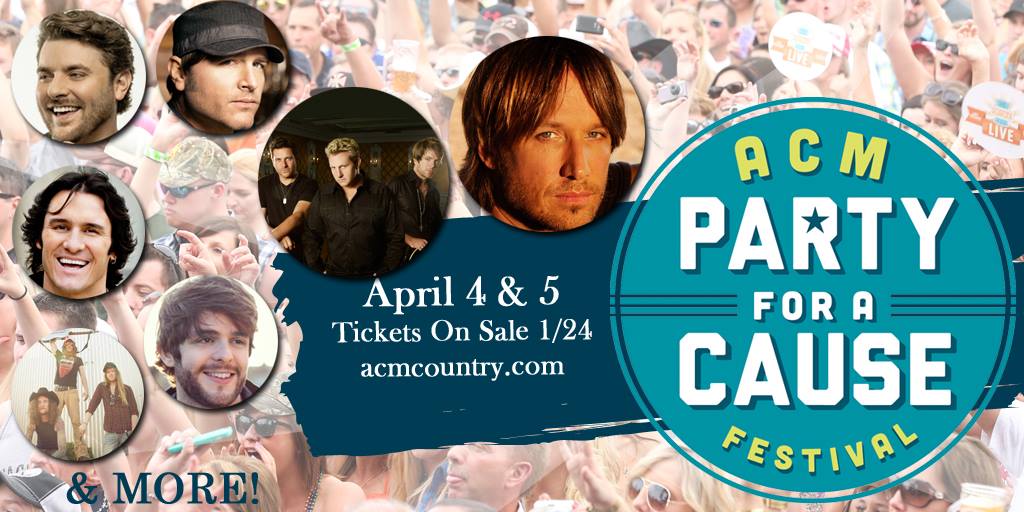 The Academy of Country Music announced the partners, activities and special events taking place during the 2nd Annual ACM Party for a Cause® Festival, a two-day outdoor music festival headlined by Rascal Flatts and Keith Urban on Friday, April 4 and Saturday, April 5.

“We are thrilled to partner with some of America’s most recognized brands in order to create a dynamic, interactive experience for our fans,” said Teresa George, Senior Vice President, Brand Integration and Strategic Partnerships for the Academy of Country Music. “Each brand’s participation is pivotal in making The Week Vegas Goes Country® one of the most exciting weeks in Las Vegas!”

The 2nd Annual ACM Party for a Cause Festival is part of The Week Vegas Goes Country® leading up to the 49th Academy of Country Music Awards on Sunday, April 6, 2014 at 8:00 PM live ET/delayed PT on the CBS Television Network. Two-day passes for the ACM Party for a Cause® Festival headlined by Rascal Flatts on Friday and Keith Urban on Saturday are available for $65 and one-day tickets are available for $45 at www.ticketmaster.com.  Other performers include Danielle Bradbery, Justin Moore, Cassadee Pope, Thomas Rhett, Florida Georgia Line and The Cadillac Three plus Will Hoge, Chase Rice and Charlie Worsham on Friday night and Lee Brice, Brett Eldredge, Tyler Farr, Kip Moore, Joe Nichols, Jerrod Niemann, Chris Young, Love and Theft and Parmalee plus Joel Crouse, Jon Pardi, Leah Turner, Austin Webb, Dan + Shay, and Max Impact, the premier rock band of the United States Air Force, on Saturday night.

A free open-to-the-public concert event, ACM Week Kick Off Party with 95.5 The Bull, will officially kick off the Week Vegas Goes Country® on Thursday, April 3, 2014 at The LINQ and serve as a preview to the 2nd Annual ACM Party for a Cause Festival.  The event will be headlined by Hunter Hayes and feature performances by David Nail, Cole Swindell and Sasha McVeigh.

For more information, visit www.ACMcountry.com, www.ACMAwards.com , like us on Facebook, or follow us on Twitter at @ACMawards for more immediate updates.  Hours for ACM Party for a Cause® Festival are Friday, April 4, 2014 from 4:00PM – 12:00AM and Saturday, April 5, 2014 from 12:00PM – 2:00AM. Download the FREE ACM App for maps, information and to build your own schedule for The Week Vegas Goes Country®. iPhone users can download the app HERE and Andriod users can download the app on Google Play HERE.

Additional details on the events, activations and partners for the 2nd Annual ACM Party for a Cause Festival can be found below:

ACM EXPO MARKETPLACE
For the ultimate country shopping and marketplace experience, the ACM EXPO presented by Roper includes shopping and experiential exhibits. Unique vendors from all over the country will offer a variety of products and artists will stop by various booths to take pictures and sign autographs. EXPO booths will be open 6:00PM-11:00PM on Thursday, April 3 during the free open-to-the-public ACM Week Kick Off Party with 95.5 The Bull, and during the ACM Party for a Cause Festival from 4:00PM-10:00PM on Friday, April 4 and 12:00PM-10:00PM on Saturday, April 5.

ACM & ACM LIFTING LIVES BOOTH
Check out the history and what’s new with the Academy of Country Music. Win prizes including a chance to attend the 49th Annual ACM Awards on Sunday, April 6, interact with our official social media booth and sign up to become a member of the ACM A-List. Lots of great ACM merchandise available!

AUTOGRAPH SIGNINGS
Fans will have the chance to get an autograph from several artists at the festival! PureVia presents a signing by Jewel at the ACM booth, Cowboy Troy and Joe Nichols will be appearing at the Roper booth, and Joel Crouse, Will Hoge, Chase Rice, Leah Turner, and Austin Webb will stop by the ConAgra, Dr Pepper, Firestone and RAM booths. More artists to be announced – daily updates will be available at the festival Info Booth.

BOOT CAMPAIGN
EXPRESS YOUR PATRIOTISM and GRATITUDE for our troops at the BOOT CAMPAIGN booth! This national nonprofit, dedicated to awareness, patriotism and assistance for the military and their families, is hosting an interactive booth to let you meet surprise celebrity guests and receive cool prizes when you Pushup for Charity. Learn more at the Boot Campaign booth!

DRIVE A FIRESTONE AND DESTINATION COUNTRY TOUR
The Drive a Firestone Tour is a nationwide celebration of Firestone’s passion for performance, the journey, and now, country music. For the 2014 Academy of Country Music Awards, Firestone introduces Destination Country – a new interactive twist on tour. Firestone is adding a kick of country flare to its larger than life fan activation zone. From a customized, rugged Firestone Destination Jeep to a historic display of tires dating back to the early 1900’s, we’re bringing the legacy of Firestone to life. Put yourself in the driver’s seat of a realistic IndyCar racing video game and best of all, stop by for autograph signings by some of your favorite new country artists. We’re turning up the volume at this year’s ACM awards, so come visit Firestone at ACM Party For A Cause® Festival!

Exclusive genetics bucking bull arena
Exclusive Genetics (EG), a world leader in the bucking bull industry, will host a bucking bull competition at the festival Exhibition Arena in honor of the inauguration of National Bucking Bull Day (NBBD). Check out the EG Bucking Bulls Champion’s Tour as live bucking bulls compete daily for over $225,000 in prize money. Demonstrations are scheduled for 4:30pm, 5:15pm, 6:00pm and 7:45pm on Friday as well as 12:45pm, 2:30pm and 4:30pm on Saturday.  Guest of honor Moe Bandy will also perform on Saturday at 12:15pm.

FUN ZONE
Stop by this year’s interactive Fun Zone where you can test your skills on the mechanical bull or go sky-high on the bungee jump.

RAM RIDE AND DRIVE
Fans can experience firsthand the best-in-class performance, capabilities and competitive advantages of RAM Trucks at the RAM Ride and Drive outdoor test track. The Ram Ride and Drive is comprised of several obstacles, including a thrilling 13-foot climb where passengers experience the traction capabilities of a RAM pickup truck when driving over a 30-degree angle RAM Mountain. Fans can also check out the new features of the 2014 RAM 1500, Motor Trend’s Truck of the Year® – the first ever back-to-back champion! RAM’s monster truck the “RAMinator” will be on-site throughout the weekend to power up, crush cars and provide live demos.

FOOD and BEVERAGE
COORS LIGHT BEER GARDEN
Sit down, relax and enjoy a cold one while watching one of their many big screen TVs & listening to great country music!

DIET DR PEPPER RED CARPET EXPERIENCE
Sample the One of a Kind taste of Dr Pepper, Dr Pepper TEN, and Diet Dr Pepper and get a taste of the spotlight while getting your photos snapped on the replica ACM Red Carpet.

HOSTESS®
Hostess® wants to make your day even sweeter. Visit their tent for free treats and a chance to win seat upgrades! You can also follow Hostess on Facebook at facebook.com/Hostess, on Instagram at Hostess_Snacks and on Twitter at @Hostess_Snacks.

OLE SMOKY MOONSHINE
A true moonshine experience. Ole Smoky’s Original Moonshine is an unaged corn whiskey made from corn grown by local farmers in East Tennessee. Their century old recipe proclaims a grain bill of 80% corn, with the remaining 20% a secret that gives Ole Smoky the distinct character and bold flavor of Tennessee moonshine. Come on over to our Mobile Holler and grab one our moonshine cocktails!