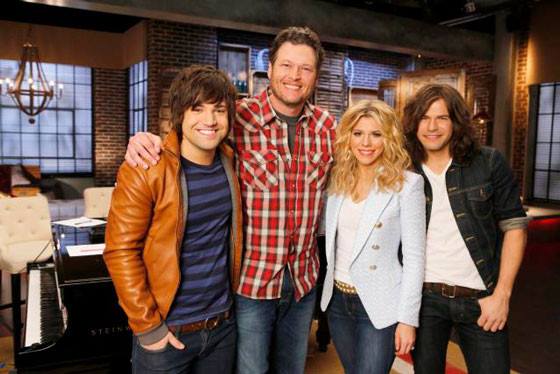 On the heels of their dynamic performance on the NFL and Fox’s Super Bowl LXVIII Tailgate pregame show, it was announced today that sibling trio THE BAND PERRY will be advising Blake Shelton’s team during the “Battle Rounds” on Season Six of NBC’s The Voice.  Tune into the season premiere of The Voice, Monday, February 24, 2014 at 8PM EST / 7PM CST on NBC.

“Blake didn’t have to ask us twice if we wanted to mentor his team this season on The Voice,”  said The Band Perry.  “It was so much fun to work with Team Blake, and after 15 years of receiving plenty of ‘constructive criticism,’ it was our turn to pay it forward.  We just hope we were as helpful to Blake’s team as our own mentors have been to us through the years.”

It was also announced the award-winning family trio will be featured on the 40th Anniversary re-mastered edition of Elton John’s 1973 seminal breakthrough album, Goodbye Yellow Brick Road, with their version of the song “Grey Seal.”  The reissued CD will be released March 24, 2014 by Universal Music Catalogue / Mercury on CD, vinyl, limited-edition yellow vinyl, and in a box set featuring recording of ‘Live At Hammersmith 1973’ on CD, a DVD of Bryan Forbes’ 1973 film ‘Elton John and Bernie Taupin Say Goodbye To Norma Jean and Other Things’, along with a 100-page illustrated hardback book packed with rare photos, memorabilia and new essay containing interviews with Elton John and Bernie Taupin.

“Elton John is a musical hero of ours, and to be included in a project with him is something that is beyond our wildest dreams,” said the band.

Last week, The Band Perry received two award nominations from the Academy of Country Music for “Vocal Group of The Year” and “Music Video of The Year” for their #1 smash “Better Dig Two.” In 2012 and 2013 the band received nominations in the “Vocal Group of the Year” category. In 2011, the award-winning trio was nominated for five Academy of Country Music Awards and won, “New Artist of the Year” and “best new vocal duo or group.”

The Band Perry is currently on the road on their WE ARE PIONEERS WORLD TOUR.  A full list of dates can be found at thebandperry.com.