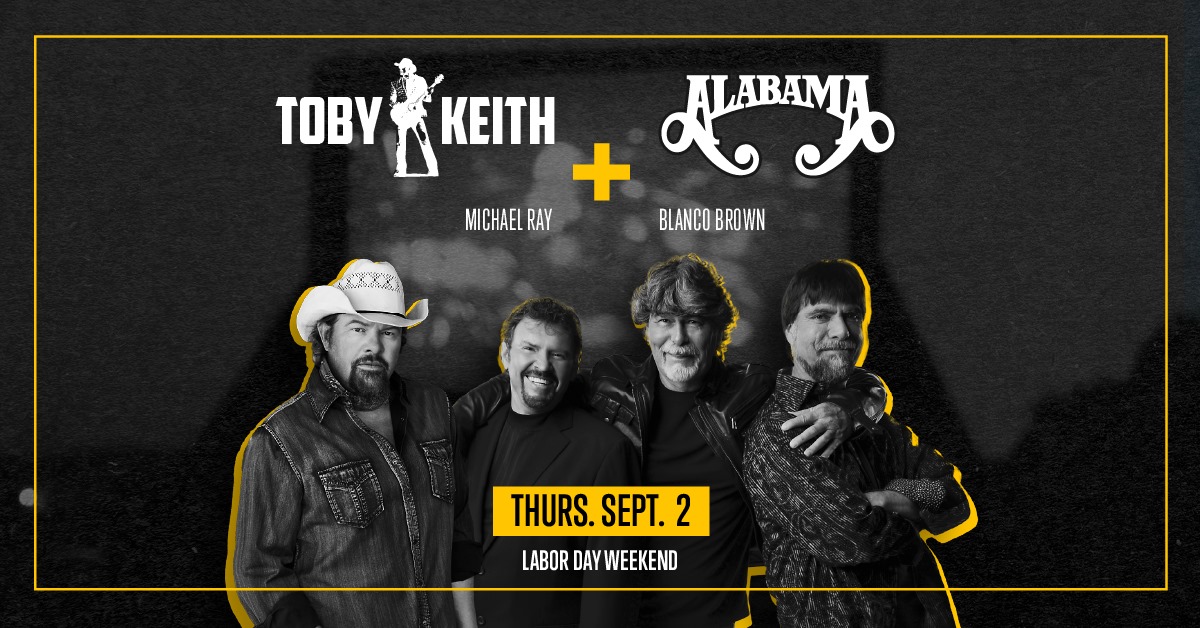 Country Kickoff to Labor Day Weekend featuring music legends Toby Keith & ALABAMA with a pre-show performance by hitmaker Michael Ray and hosted by Blanco Brown will jump-start the end-of-summer party across North America on September 2nd. The star-studded concert event will be the tailgating party of the season at hundreds of outdoor movie theaters across North America for one amazing night only.

Country Kickoff to Labor Day Weekend will include exclusive content and never-before-seen recorded concerts by Toby Keith & ALABAMA, two of the best-selling music acts of all time.

With three No. 1’s and five RIAA Gold-certified singles, country music star Michael Ray will also perform as the night’s opening act, featuring his current Top 25 and climbing single “Whiskey And Rain,” while multi-platinum artist, songwriter, producer, and TrailerTrap creator Blanco Brown, who is known for blending the sounds of country and hip hop, serves as host for the night’s festivities as the event is streamed to hundreds of outdoor movie screens around the United States and Canada.

Fans are encouraged to bring their friends and family, get out of their cars and dance while cranking the concert through their car speakers and radios.

“Have a great Labor Day and enjoy the show!” said Toby Keith.

“Over the years, we’ve performed in every type of venue and recorded our music across every type of format, and this night is really shaping up to be one of the coolest we’ve been a part of,” says ALABAMA’s Randy Owen and Teddy Gentry in a joint statement. “To reach fans in big cities and small towns all across the country with the same show is going to make for not only an awesome concert experience but a heck of an outdoor tailgate party too!”

“A few of the best things about Labor Day are soaking up the last few days of summer and kicking back to enjoy some of your favorite music,” said Walter Kinzie, CEO of Encore Nights, which is producing the all-star show. “There’s no other event that will offer everyone all of these things simultaneously the way that Country Kickoff to Labor Day will. Fans can tailgate, enjoy the party and sing along to some of the greatest bands ever!”

The Toby Keith and ALABAMA performances were specially filmed for this one-night-only event in Nashville and Fort Payne, Alabama, respectively. The co-headlining acts will provide music fans an unparalleled concert-going and tailgating experience in a fun, family-friendly environment.

Widely regarded as two of the most successful music groups in history, Toby Keith & ALABAMA will share the screen and play chart-topping hits and new songs amassed over their hugely successful careers.