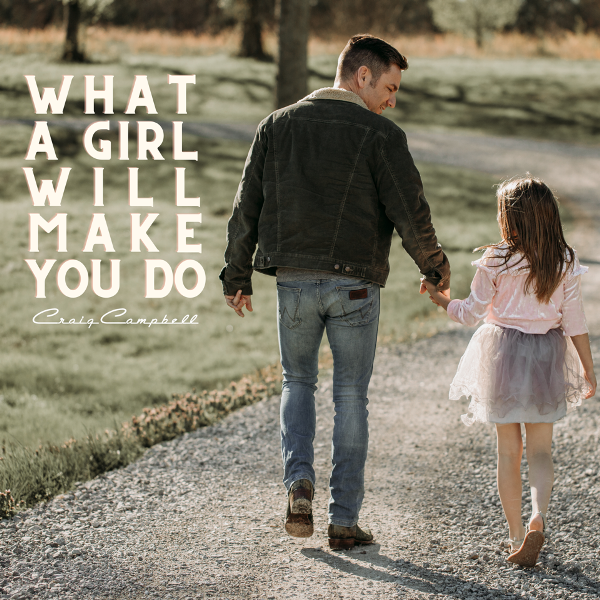 Craig Campbell didn’t have to look far for motivation for his new single “What A Girl Will Make You Do.” Whether it’s a wife, girlfriend, mom, or daughter, women can make you do crazy things because you love them. Written with Brian Davis and Blake Bollinger, the song is available now on Grindstone Records. Check out the new single HERE.

“When this idea was thrown out at our writing session, I knew right away I wanted to chase it down,” said Craig. “Having two daughters and an amazing wife has been very inspirational in my musical journey, and when we wrote this song I knew they had to be in it somehow. Recording it was a fun process, even with all the covid challenges, and I have been chomping at the bit to let the world hear this one.”

“To catch a smile, you’d rope the moon.
Ain’t a mountain you wouldn’t move.
Ain’t nothin’ you wouldn’t go through.
It’s crazy, what a girl will make you do.”

The new single follows Craig’s popular thirst-quenching “All My Friends Drink Beer” release. The music video featured his notable friends like Jaren Johnson from The Cadillac 3, Randy Houser, Granger Smith and other familiar faces who recorded their own segments during last year’s quarantine.

Craig will host and perform an acoustic set during a virtual single release party on Wednesday, February 24 at 7 p.m. Central. In addition to the performance, there will be a live Q&A about the single with Craig and surprise guest. Tickets are $10 and are available HERE.

Like all of his friends, Covid19 and the 2020 lockdown was and is a challenge for Craig as a touring artist. However, it has been a blessing in other ways. “I have been able to enjoy more time at home with my family, something that hasn’t been the case for the past 10 years. It has also allowed me to focus on writing and producing new music. No touring schedule to work around. I feel like these past 12 months have given me the opportunity to write and record some of the best songs of my life.”

Plans are in the works for Craig to hit the road beginning next month. Fans can catch him at Victory North in Savannah, GA on March 25 and at The Barn in Sanford, FL the following night. Check out CraigCampbell.TV for updates on touring.