Steadily building his reputation to match his incredible live performance, Ryan Kinder sets his sights on a 14-cty headline tour to round out the year and kick start the next. The Alabama-bred singer/songwriter who has been praised for “leaving his passion on the stage, hoping that fans walk away knowing he put everything out there” (Sounds Like Nashville), will hit the road November 10 through early 2018 to spread his rural rock sound to audiences across the country.

Coming off the success of his viral hit “Close”, which has amassed over 25 million on demand streams to date, Kinder has teamed up with Shazam to provide one-of-a-kind experiences for his fans. Hopeful concert-goers will be able to visually Shazam Kinder’s tour posters for access to exclusive photos and videos as well as a chance to win tickets to an upcoming show. The posters will be displayed in tour markets leading up to each stop as well as through special posts on Kinder’s social media. Tickets are available at www.RyanKinder.com. 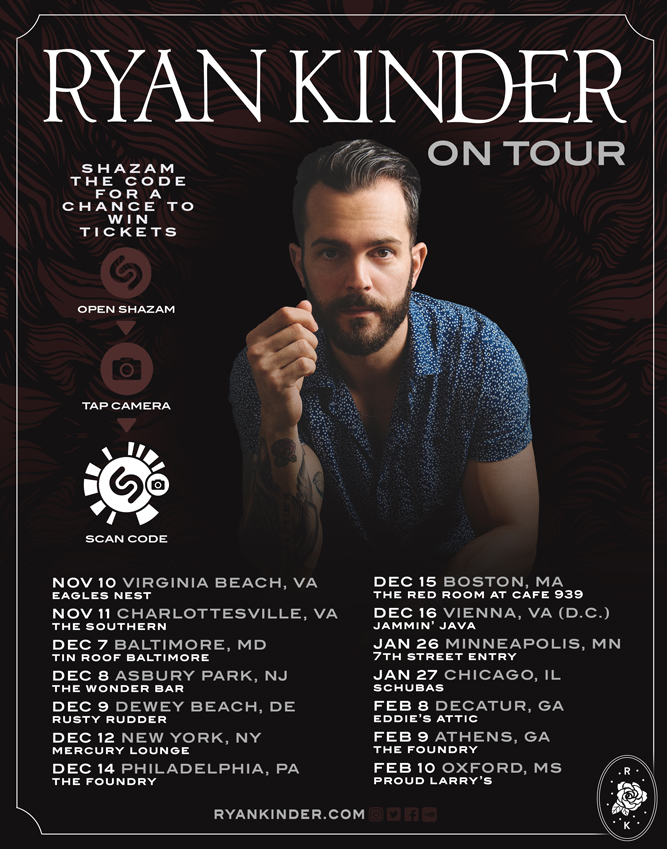 Sure to make an emotional impact on tour, Ryan’s latest offering “Still Believe In Crazy Love”, written by Jerry Flowers and the late Andrew Dorff, has quickly gained momentum with its message of hope. The accompanying music video premiered with Billboard,who proclaimed that the track “has taken his career to a different level.”

In an effort to show the depth of Kinder’s musicality, he has released different versions of the song in hopes that he can truly connect with fans. Directed by Justin Key, the many versions of “Still Believe In Crazy Love” are showcased by the poignant visuals and intermittent audio breaks allowing each individual to share their unique story.

“[My] older songs were more to the point and had a certain feeling in mind that was very focused into one idea, and ‘Crazy Love’ means something different to every person,” Kinder told Billboard. “I think that’s why it resonates with so many people, because it means something painful, joyous, redemptive, heart-aching, whatever it is that they experience, it’ll bring that emotion back and make them feel it in three and a half minutes.” Kinder will release interviews capturing the full stories of those who appeared in the video in the coming weeks.

With his powerful yet vulnerable voice, guitar skills and 30+ million streams, the Rolling Stone “Country Artist You Need To Know” is set to release more music from his upcoming debut album on Warner Bros. / Warner Music Nashville and preview some tunes on the road.