The two day, multi-stage, family-friendly festival is the new torchbearer for American music in the South – a beacon of music, arts, and family culture taking place on the Ascension Fields at Lamar Dixon outside Baton Rouge, LA on October 7 and 8, 2017. 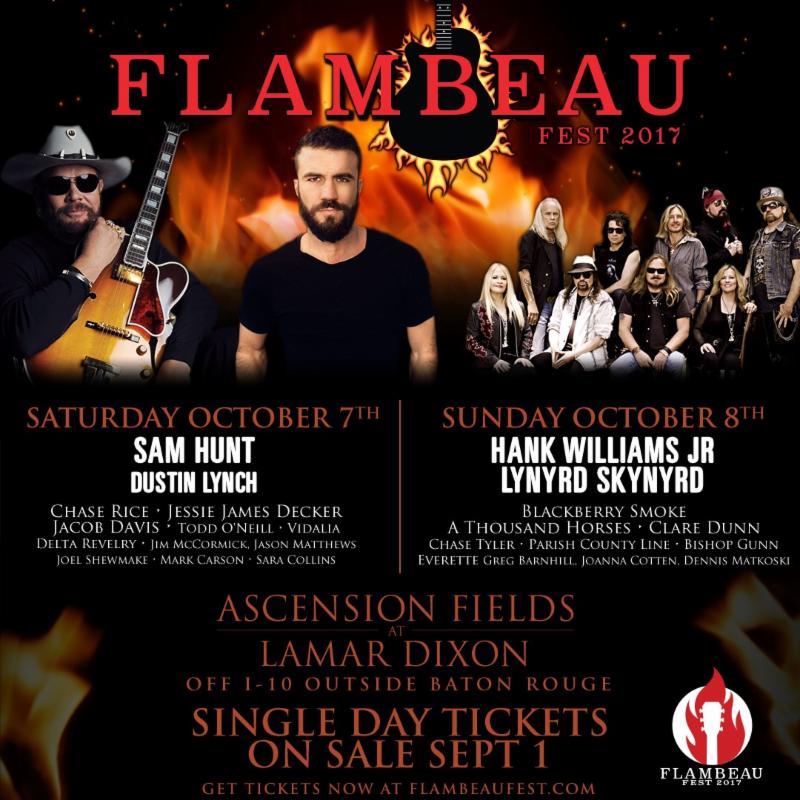 Two-day tickets are available for $149. Two-day VIP packages are also available at $319 (VIP) and $679 (VIP Platinum). And JUST ANNOUNCED: Single Day Tickets go on sale Friday September 1. For tickets, head over to FlambeauFest.com.

Dreamt up in 2015 by producers Mark Miller, Eddie Pearce, and David Addison, Flambeau Fest is poised to rekindle an area of Southern Louisiana that has not seen the launch of a large-scale music event since the devastating Baton Rouge flood of 2016.

Featuring world-class musical artists, regional breakout performers, local artisans, and the community-orientated hospitality that defines southern Louisiana culture, Flambeau Fest will present 3 stages filled with great music. The MAIN Stage will be loaded with A-list country artists and Southern Rock icons. The Torch Stage will showcase rising stars in country music, including multiple regional breakout talents. Unique to Flambeau Fest, the Songwriter In-The-Round Stage will play host to some of the greatest Nashville #1 hit songwriters. A wide variety of authentic cuisine and libations from the region’s top vendors will also be available, including tastings from local craft breweries, distilleries, and wineries.

In additional to a fun filled weekend in Southern Louisiana, Flambeau Fest will drive tourism dollars to the effort to rebuildan area hit hard by flooding. In addition, a portion of the proceeds from this year’s event will be donated to the Lynyrd Skynyrd Foundation for education and cultural impact.