Chris Janson knows how to turn a rainstorm into a party! “Country music’s most energetic performer” (Nash Country Daily) took the stage at Rock the South this Saturday in Cullman, AL for a wet set to a packed crowd of dedicated fans. Janson played favorites such his co-written Tim McGraw hit “Truck Yeah” and the No. 1 smash “Buy Me A Boat.” See a video of the audience singing along in the rain here.

“When 20,000 fans stand in the rain, so do you!” said Janson. “No one else in my band could perform because there was no way to cover their gear. My only options were to cancel my set or play acoustic – so that’s what I did. It turned out to be a beautiful thing.”

Janson also played songs from his forthcoming Fix A Drink – EP, due this Friday, June 9. With five days to go until its release, the EP and its title track have already earned critical praise. Sounds Like Nashville declared that “Janson is fully locked and loaded with a new group of songs,” while Rolling Stone called the single “a clever kiss-off to the troubles and tribulations of everyday life.” The song’s official music video features Platinum-selling recording artist Luke Bryan, label mate Michael Ray, Dustin Lynch, LOCASH and the Davisson Brothers Band carefree and kicking back with Janson.

The chart-topping singer/songwriter added: “Summer is here, and so is my new EP. It’s a perfect soundtrack for anyone who wants to have a good time. We’ll have a full blown album later on this summer – but for the time being, I hope this satisfies the itch to have some new music in hand. Until then, crank it and ‘Fix a Drink!’”

Janson is in Nashville this week for CMA Fest, which will include his performances at the Annual Friends Club Party at WildHorse Saloon and Chevrolet Riverfront Stage on Thursday. He is currently on the road with Sam Hunt for the “15 in a 30” tour, which launched on June 1 in Cleveland (full dates below), and he will join Tim McGraw and Faith Hill later this summer for their “Soul2Soul” tour. 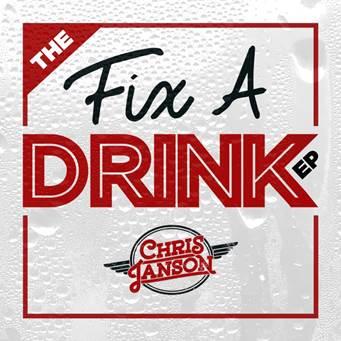