Singer/songwriter Ryan Kinder will temporarily trade in his guitar for a bicycle on May 24 when he sets off on the Tour de Natchez Trace, a four day bike ride covering the 444 miles of Natchez Trace Parkway. Kinder has chosen to ride in honor of friend Kyle Wagley, Chief Warrant Officer Three in the United States Army.

After he defeated stomach cancer, with which he had been diagnosed two years earlier, Wagley completed the Natchez Trace journey in May of 2016. Though a relapse led to his passing in March, Kinder and Wagley’s wife Stormi will tackle the challenge in his place. Proceeds from the event support the Aegis Sciences Foundation, which raises money and directs funds to partners that can make a difference for military veterans and their families. 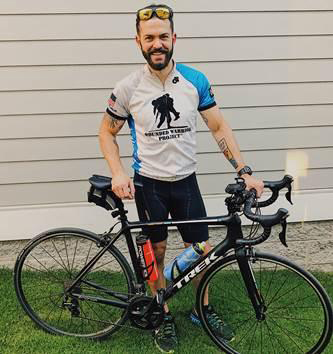 “Honestly, I don’t know how the hell I am going to do it,” Kinder said. “I do know I wanted to do this in his stead and couldn’t let Stormi do it alone. Kyle’s example has inspired and changed my life. He was a great patriot, father, husband and friend – and I am so privileged to honor his memory in this way.”

Kinder will jump back into music after his journey down the historic parkway as Nashville’s CMA Music Festival approaches, including performances at the 2017 Concert for Love and Acceptance on June 8 and at the Gildan Broadway Stage at Hard Rock Café on June 9.