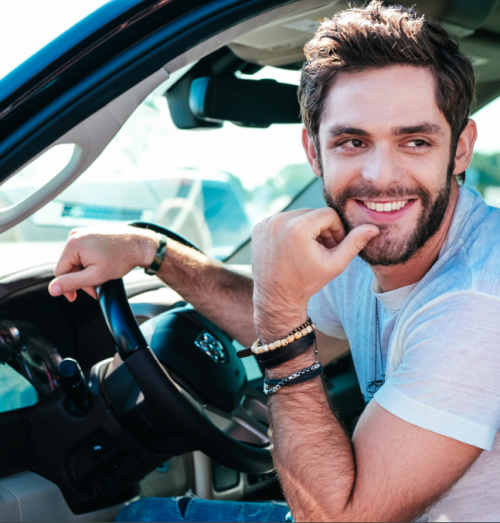 After spending just seven weeks at country radio, multi-PLATINUM artist Thomas Rhett‘s latest hit “Die A Happy Man” has been certified GOLD by the RIAA for digital sales of over 500,000 units. The “love-ballad gem” (Music Row) featured on his sophomore album TANGLED UP (The Valory Music Co.) has fast-tracked in sales landing on the iTunes all-genre Top 10 ahead of cracking Top 10 status at radio as his fastest rising single.

The CMT On Tour headliner continues to be applauded for his “impressive pipes” and “forward thinking” live show (Sioux City Journal) as he keeps “pushing up against country’s music boundaries” (Associated Press). Repeatedly tallying sold-out shows including New York City, critics have confidently noted that there is “no doubt he’s on his way to superstardom” (Patriot Ledger). Thomas Rhett will continue to “charm through his set” (Village Voice) with upcoming CMT On Tour stops this weekend in Pikeville, KY (11/19), St. Louis, MO (11/20) and Independence, MO (11/21).

It is his PLATINUM certified chart-topping hit “Crash And Burn” that launched his recent sophomore album TANGLED UP, solidifying why Thomas Rhett is “well on his way to becoming country music’s next legendary superstar” (Glamour). Rolling Stone notes “he’s discovered the artist he was always meant to be” while he continues to serve as “a standout among a crowded crop of acts” (Billboard). After initially garnering attention as a gifted songwriter with credits including hits by Florida Georgia Line, Jason Aldean and Lee Brice.

For more information and for a full list of upcoming tour dates, visit www.thomasrhett.com.