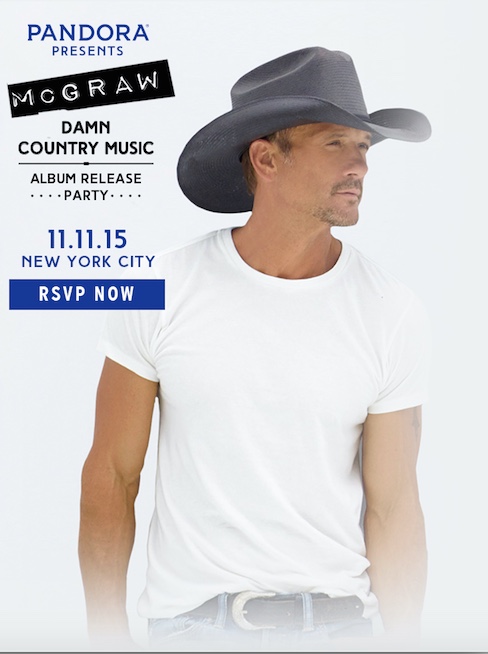 In addition to this intimate performance, Pandora worked with the singer to curate a custom mixtape featuring songs that have inspired Tim throughout his career.  His latest album, Damn Country Music, will be released on November 6 on Big Machine Records / McGraw Music.  Tim McGraw is a perennial favorite on Pandora. He’s the 25th most played artist overall and #5 in the country genre. His music has been spun an impressive 3.65 billion times on Pandora.

The release of Damn Country Music will cap off an exceptional year for McGraw, which began with a critically acclaimed performance of “I’m Not Gonna Miss You” from Glen Campbell: I’ll Be Me at the 87 Academy Awards on February 22. In April, McGraw was included on the TIME 100 –Time Magazine’s list of the 100 most influential people. He also narrated an ESPN Films and SEC Network documentary.

Continuing to bolster his film career, McGraw starred in Disney’s Tomorrowland in May before kicking off his wildly successful Shotgun Rider tour in June. The tour thrilled thousands of fans and awarded mortgage-free homes to veterans through McGraw’s partnership with Operation Homefront & Chase in more than 30 cities throughout the summer, making the NYC show day of Veteran’s Day very fitting.