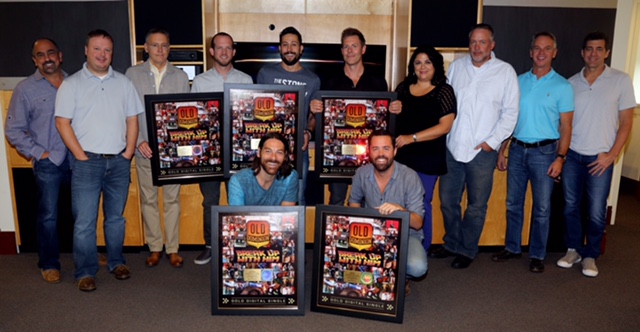 Starting this Friday, Oct. 2, fans can pre-order the much anticipated and high-energy debut album, Meat and Candy, from the RCA Nashville’s rising country band, Old Dominion. With the digital pre-order, fans will receive four instant song downloads including the hit, and now RIAA gold-certified track, “Break Up With Him.”


“This year continues to be one for the ages for us,” said Matthew Ramsey. “Months ago we were in our van, pounding the pavement to build our fan base. Now we have a gold record! Our fans and friends at country radio are amazing and we look forward to singing this song with them for a long time!”

It’s no fluke that “Break Up With Him” is now certified gold. The hit song continues to prove that it’s exactly that, a hit. This week, the song that all five band members wrote together collectively, made a massive and rare jump from No. 11 on the Billboard Country Airplay chart to No. 6. Furthermore, on the Country Aircheck/Mediabase chart they jumped from No. 12 to No. 9.

2015 continues to be a big year for the band that has been together more than eight years. It began with Old Dominion being included in multiple 2015 watch lists including Billboard, Huffington Post, Rolling Stone Country, Nashville Lifestyles and Spotify, where the band’s self-titled EP has garnered more than 24 million streams. Those numbers reflect the excitement from both longtime and new fans of the band who tours relentlessly. By the end of 2015 Old Dominion will have performed more than 170 shows which includes 18 stadium dates opening up for Kenny Chesney this summer on the Big Revival Tour.

2016 is shaping up to be even bigger and better as the band that exudes swagger and sincerity will hit the road again with Kenny Chesney. In addition to opening up for the superstar, two Old Dominion band members (Matthew Ramsey and Brad Tursi) co-wrote his current second-week No. 1 song “Save It For A Rainy Day.”